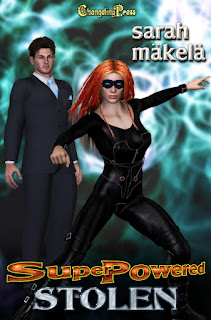 Woohoo! Here's my latest release. I'm thrilled about this superhero story (and a little worn out from my NaNoWriMo win last night *grins*), and I can't wait to hear what everyone thinks!

Regina Blake is a normal secretary until there's trouble -- then she becomes the Dark Huntress. Things are about to change when she meets a man whose electrifying power is a fine match to her own, and he's set on winning her heart. To top it off, there's a string of bank robberies which escalate into the high profile kidnapping of a famous actor.

Michael Flynn hadn't realized the extent of superhero and supervillain society. When he rushes to a bank to find it destroyed, he meets a black-latex-clad woman who makes his pulse race. As he's drawn deeper into her world, he finds himself intrigued and eager to have her.


Staring at her watch, Regina Blake balanced a stack of books in her arms as she headed up the stairs to the public library. She didn't have much time until she needed to be back at work. Thirty-minute lunch breaks sucked when it came to tackling errands.

The sound of wheels barely penetrated her thoughts as a force slammed into her, knocking her aside. Glancing up, she grimaced at the tall, lanky kid hovering over her.

"Sorry, ma'am. Are you okay?" The kid ran his palms over his denim jeans.

A handsome man in a nice suit knelt by her, scooping her library books into a pile. He glanced at the young man and frowned. "Go on, buddy. Just watch where you're going next time."

The kid picked up his skateboard and rushed away down the stairs.

The man smiled and offered her a hand up. "You should probably watch where you're going, too."

Regina accepted his hand and climbed to her feet. She brushed off her skirt and got a good look at him. He had dark brown hair and humor sparkling in his dark eyes. "Yeah, you're right."

He chuckled, her hand still in the warmth of his. "Are you okay?" He cradled her library books to his chest. "The name's Michael."

She pulled away. "Regina. Can I have my books? My lunch break is almost over."

Michael nodded. "No problem. I'll walk with you. I'm headed that direction anyway."

Shrugging, she continued up the stairs. Her hip ached after that fall. She'd make sure the books were dropped off, but then she was leaving. Pronto.

Her hidden earpiece buzzed a second before a deep male voice came on the line. It had been some time, but Kit, her dedicated situational analyst for when she became the Dark Huntress, always found crime for her to fight. "A robbery is in progress a few blocks away at Third Central Bank. Whoever it is seems pretty fierce. Please be careful."

She bit her lower lip, wanting to respond to Kit, but right now wasn't the best time. Besides, who the heck would rob a bank at twelve-thirty in the afternoon on a Wednesday?

"So, what do you do for a living, Regina?" Michael asked as they neared the top of the long flight of stairs.

His voice drew her away from her thoughts. She stopped and turned toward him. "I hate to sound rude, but I really have to go. Could you please drop my books off for me?" She gave him the super sweet smile she gave her boss when he looked like he wanted to disapprove.

Michael's eyebrows furrowed and soft lines creased his forehead. "Sure, I can do that. Where are you rushing off to, though? Was it something I said?"

"No, not at all. My work starts in a few minutes. That's all. I don't want to be late." She turned and rushed down the flight of stairs. The ache in her hip had faded to a dull throb. Her main concern now was changing into her disguise and getting to the bank robbery. Hopefully while it was still in progress, so she could catch the bad guys. Casting a glance back, she spotted a hint of confusion on Michael's face. Maybe she shouldn't have been so brusque in her departure.

Nothing she could do about it now. Running into an alley, she ducked between two Dumpsters and pulled out her black suit and mask from her oversized purse. She cursed at the need to change in a dirty alley.

A few short moments later, Regina leapt into the air. Wind rushed through her hair as she flew skyward. Once she crested the rooftops, she directed her course toward the Third Central Bank. Her eyes widened when she reached her destination.

Two security guards lay on the sidewalk, their mouths foaming, bodies twitching. An armored cash transport van had crashed into one of the supporting columns. Civilians around the scene were frozen in place as if their muscles had been paralyzed. Their horrified, wide-eyed stares proved that they were aware of what was happening.

Regina descended to the ground and hid behind a column close to the bank's broken glass doors. She took a careful glance inside. The view echoed the destruction she'd seen outside, except for several masked figures. A few goons busily shoved money inside large bags. One of the clerks typed furiously on a terminal while a tall, bronze-skinned woman stood behind her. She had one hand against the top of the clerk's head and smiled mysteriously.

One of the masked figures near Regina's location glanced her way and yelled in alarm. Oh, geez... She should've known better than to stare for too long.

First one person then another began shooting the column she stood behind in steady intervals. There were pauses among the short bursts. The goons obviously knew the value of ammo. What a shame.

Glancing around her, Regina spotted a storm sewer grate nearby. She pulled the lid to shoulder height and waited for the masked figures to stop shooting. Despite her petite frame, she was more than capable of lifting big trucks and boulders, another ability she'd been born with along with flight.

When one of the gunmen paused, Regina ducked out and threw the grate like a Frisbee with swift precision. Its flight missed the civilians by mere inches before hitting one of the goons in the chest. He shrieked and fell onto his back.

The woman behind the clerk stayed focused, but her gaze wandered around the room, finally connecting with Regina's.

"Stay there," a feminine voice commanded in Regina's head.

Regina stopped in mid-step just before one of the counters. Her body refused to move, no matter how hard she tried. Out of the corner of her eyes, she saw the goons simply continue their work and finally escape with their female leader. They had lost their interest in Regina like she was just another helpless victim.

Michael Flynn stood in the doorway of the trashed bank, dressed in his dark leather disguise. He'd heard gunshots on his walk back toward his office in a nearby skyscraper. The destruction around him was mind numbing.

Further inside the building, a masked woman leaned over the bank's counter. She was dressed in black latex that hugged every curve of her body.

He wouldn't wait to ask questions. Not with so many innocent people lying around for the woman to take advantage of. She had to be one of the villains left behind after the action. Why else would she be here?

He darted forward and tackled her to the floor.

He threw up his arms. Electricity arced through the air between his hands, and he shot an electric bolt at her.

She cried out, and her body convulsed as electric currents coursed through her. She slapped to the ground hard and wriggled there a moment. Her painted red lips pressed together in a grimace as she forced herself to her hands and knees.

"I could ask the same of you."