As I'm writing my work-in-progress, I still do 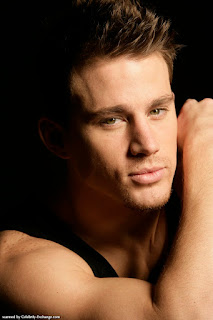 character research. Sometimes this comes at interesting times like when I'm watching a movie. My family watched G.I. Joe: Rise of the Cobra the other night, and the person who played Captain Duke (Channing Tatum) really struck me as a great actor, but it made me think of my hero as well. Thus spurring some Googling, and ta-da, I have a little better grasp of my hero.

Images and the way people act and react are something I love watching, so movies are great for me when I'm contemplating characters. I also turn to music, which I get a lot out of lyric-wise, and I have a fondness for Youtube and watching music videos. So that's another place I go for character ideas.

I had another incident the other day when I was listening to Pandora.com while writing, since if I'm on the computer, I tend to be listening to music as well. And so, I heard a song on Pandora that I'd heard previously, but with the scene I was doing that had the villain and my heroine in it, it struck me differently, and the song epitomizes my villain. I was doing a dance and all excited to find that out. My hubby probably thought I was weird since I made him listen to it again with me (on Youtube), but I was perky and content after that.

Maybe I've given something useful for others to try out, but I certainly know this works pretty well for me. =)
Posted by Sarah Mäkelä at 11:25 PM No comments:

Email ThisBlogThis!Share to TwitterShare to FacebookShare to Pinterest
Labels: for fun, writing tips

I've been keeping with my word count goals, and writing at least 1k each day. I had initially came down from doing National Novel Writing Month thinking that I would write 3,000 words per day, but I quickly found out that is not a good day-to-day pace for me. Somehow November has a magical way of pulling very high word counts from me, but outside of November, my pace is not as hasty, which probably is a good thing. So, I'd said to myself, I'll do 2,000 words a day, but still I couldn't quite push myself to do that (especially since my computer is in the repair shop aka Geek Squad right now, and I'm either using my husband's computer or writing longhand).

Dropping down my word count goal to 1,000 words a day (seven days a week) has been good for me right now. It's enough that I'm making progress each day, but it's not enough to take away from time with family or to stress me out. I can make it each day because if I overshoot my word count goal to something that I can't consistently do, then I would just end up stressing out and beating myself up when I didn't hit my goal. That would make me procrastinate, and I'd not really want to write, which would drag me out of the story and then I'd be in a bad spot creatively.

Making goals is important, and everyone should make goals that push them to succeed. Just remember not to make ones that you can't feasibly meet. There's a better chance that you will freeze and end up not achieving your goals. =)
Posted by Sarah Mäkelä at 9:29 PM No comments:

Nano follow-up and The Warrior Writer

As my neat little widget says, I managed to beat National Novel Writing Month (NaNoWriMo) last month. It was pretty dang close, too. I slacked off toward the middle of the month and ended up having to do a few intense, high word count days. Thankfully, I didn't mess myself up too much by slacking. I think the high word count days helped me to get a renewed "ummph" toward the novel though. Woo! I've recovered from the push of Nano and now I'm going at a slower steadier pace of at least 1k words per day, which I've made my current goal thanks to Bob Mayer's The Warrior Writer workshop that he's been presenting to my RWA chapter, Fantasy, Futuristic & Paranormal. Bob Mayer is an excellent teacher, and I'm learning a lot from the workshop. We've covered tons including Fears and Goals. I have definitely put his Who Dares Wins book on my "to buy" list.
Posted by Sarah Mäkelä at 2:57 PM No comments: