I’ve gutted and redone two houses. I love it! Well, not the gutting part, but the point where the sheetrock is newly primed and the floors are bare. And it doesn’t matter if it’s a bedroom or the living room, the decorating possibilities are endless. What mood and tone do I want in this room? Energetic? Relaxing? Peaceful? Paint color and furniture style make the biggest impact. Bold paint choices and colorful furniture beg for attention from the moment you enter. But subdued lighting and overstuffed chairs invite a visitor to sit and linger. When you add the little details, plants, curtains, pillows and pictures, the room takes on a life of its own.

And I’ve discovered writing is very much like this.

Like entering a room, the tone and mood of a story is set from the very first paragraph. I make a promise to a reader when I begin and need to carry that throughout the journey. I can’t have them begin with lots of dark characters, action and danger and move them into a quiet mystery with a reluctant detective. That would be like setting up an exercise room and randomly putting out beanbag chairs for lounging. It doesn’t make sense.

I’m what’s called a “pantser”. That is, I don’t know the full extent of my story or my characters until I’m writing. Then slowly after I’ve written a chapter or two, like painting the wallsand laying the floor, my story has a mood and tone. The quirky details my characters develop, how the secondary characters interact with them and the way they move within the setting, like the knick knacks in my rooms, need to match the pace and tone I’ve set.

How do you feel about the tone of a book? Have you ever read a story that didn’t quite match the expectation?

My newest romantic suspense series, Tilling Passions, involves three sisters, family relationships, and the angst and mystery of finding “forever” love. The second book, DECEIVE HER WITH DESIRE, is available now in most digital formats.

BLURB:
A woman determined to protect her heart. An agent hell bent on proving himself. One night that will change their lives forever...

Landscaper, DEIRDRE TILLING had no way of knowing that attending her friend's party would throw her into a dangerous world of corrupt businessmen and police stings. Of course her sexual romp with undercover DEA agent, AYDEN SCOTT only pushes her deeper into the drug smuggling ring running up the Maine coast. As the heat rises between Deirdre and Ayden, one thing becomes painfully obvious...their relationship has jeopardized his mission and now someone wants them both dead. 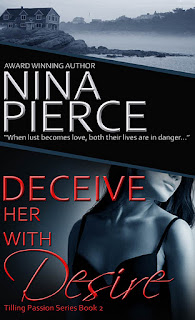 A familiar whistle sliced through their growing anger. Julie dropped her hand from her mouth and pinned her sisters with a hot glare. It had stopped Meghan and Deirdre’s bickering since they were teens. Damon and Peter bit back knowing smiles, their forks continuing the slow glide from plate to mouth.

Yeah, some things with the Tilling clan never changed.

Julie straightened the napkin on her lap. “Meghan, that’s enough. Deirdre’s allowed her privacy. Now can’t we just have a nice—”

“Secrets? Really? Even if it includes drug arrests and police?” Meghan asked. “Was Austin your arresting officer, Dee?”

“I’m not a cop and she wasn’t arrested,” Austin said evenly.

“You don’t need to explain yourself to them, Austin.” Deirdre stood, her bravery shattering with the tears glistening in her eyes. “And I sure as hell don’t need your shit right now, Meghan. It’s been a long couple of days.”

Peter reached across the table, taking her hand again. “Dee, I’m sure there was a mistake with the Cutler police. Meggie spoke out of turn. Sit down. Finish your breakfast.”

Deirdre fell heavily into the chair unable to carry the weight of her friend’s betrayal. “Rachel told you too?”

“Of course she didn’t tell him. I did,” said Meghan.

“Told you what?” Julie asked, her gaze bouncing across the faces of her family. “What the hell are you all talking about? Why am I always the last to know about this stuff?” She put her hands to her cheeks. “And whatever it is, please tell me you didn’t tell Mum.”

“Of course I didn’t mention it to Mum. She’s got enough to deal with,” Meghan said defensively. “Why do you think I’m asking now?” She turned back to Deirdre. “So?”

“I was arrested for drug possession yesterday on my way home from a landscaping job in Cutler.” Deirdre’s voice sounded hollow even to her own ears.

“You can’t be serious?

Her sister’s questions tumbled out over each other.

A sob escaped as Deirdre put a trembling hand to her mouth. She wanted to be brave, but Meghan’s attack brought the fear slamming right into her heart. “Heroin. Five packets under the driver’s seat of the one-ton.” Ayden wrapped his arm around her shoulders, pulling him against the solid weight of him. “Someone tipped off the police. Four cars chased down the one-ton and…” She inhaled a shaky breath. “They don’t know who called it in, but they pulled me over and surrounded me with guns.”

“Oh, honey you must have been so scared.” Julie laid her hand on Deirdre’s thigh.

“Dee, I’m sorry. I didn’t know.” Meghan’s eyes glistened with unshed tears. “I thought they’d found some pot.” She shrugged. “I just assumed you were doing some partying like the old days. Really. I’m sorry.”

Deirdre just shook her head, the hot press of dread clogging her throat and making it impossible to talk.

“The man she works for brought in a lawyer.” Austin replied. “It’s not going to go any further. Some minor red tape with the Cutler police. After talking with Mark Pearson and Rachel, Deirdre’s thinking it could have been one of the high school students who work for her.”

“It doesn’t matter how the drugs got there. Everyone in Delmont is going to assume the worst. I’m afraid when it hits the backyard fences, we’ll lose business,” she said.

“Well, we’re just going to have to set them straight, aren’t we?” Meghan said firmly. “And if they don’t believe there was some huge-ass mistake than to hell with them. We don’t want to work with them anyway.”

“We’ll get it straightened out, Dee. Don’t worry,” said Julie.


Eventually, reading about alpha males and the journey to find their happy-ever-after endings wasn’t enough. She needed to pen her own stories of fated loves and soul mates. Nina’s discovered the passionate side of romance with her sexy stories. For her, it’s all about the sweet scent of seduction mixed with the heartwarming aroma of romance.


Nina resides in the northeast with her high school sweetheart and soul mate of twenty-seven years, their three grown children and several very spoiled cats who consider her “staff”.