Kiss and Tell
by Barbara Monajem 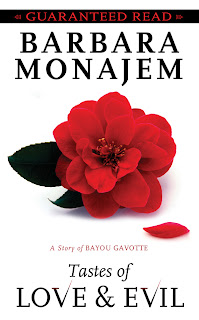 Since I write in two genres – contemporary paranormal and Regency historical – I have to approach kissing and its significance in two different ways. My historical heroines have to be very, very careful about who they kiss. In fact, they probably shouldn’t kiss a guy until they’re married to him, or at least engaged. Not that they actually follow these rules – a romance has to have a first kiss at the very least, and usually a whole lot more – but they have to appear to follow the rules. Back then, if a man kissed a well-bred woman and didn’t intend to marry her, it was extremely important for him to be discreet. If he kissed and told, he would damage her reputation, ruin her chances of marrying, perhaps even cause her to be shunned from good society. (Either that, or he might be forced to marry her.) Similarly, she wouldn’t talk about it except to someone she could trust, and even then she might hesitate because of shame or fear of accidental exposure.

Nowadays, kissing isn’t seen as a big deal. It’s more usual to kiss many people and likely sleep with some before marriage. However, this doesn’t mean people should go around kissing and telling. It’s one thing to know that, for example, a girl called Rose had sex with a guy named Jack. (Just so you know, these are the hero and heroine in Tastes of Love and Evil, my second paranormal romance about the funky Louisiana town of Bayou Gavotte). Say Rose’s BFF wants to know everything about what it was like with Jack. Should she tell her… or is sex a private matter? What if Jack wants to tell his buddies about the hot sex with Rose? Or what if either of them thought the other was a dead bore in bed? (They didn’t; this is hypothetical.) Should they say so, or just politely say, “We didn’t hit it off?”

I’m asking because I see a lot of Kiss and Tell in movies, TV, and contemporary romances, too. Do you think this reflects real life? Do people often go into details about their sex lives, or is that considered TMI? If you ask me, it’s TMI. Mostly, I just don’t want to know. How about you?

Rose Fairburn is on the run. Her vampire nature can’t protect her from everything, especially not herself. Now, when she should be worried about escaping her past, she can only think about one thing. Her kind can’t live without blood or sex. Love they must forego.

Jack Tallis can slake her thirst. Tall. Handsome. Trustworthy. And not a man alive can resist a vamp’s allure. But…Jack can. And he has other secrets, like why underworld hit men are on his trail. How he can vanish into thin air. Love suddenly seems possible, but the shadows hide mysteries darker than Rose can even dream, and all will be revealed in the fetish clubs of one strange Louisiana town….

Barbara Monajem wrote her first story in third grade about apple tree gnomes. After dabbling in neighborhood musicals and teen melodrama, she published a middle-grade fantasy when her children were young. Now her kids are adults, and she's writing historical and paranormal romance for grownups. She lives in Georgia with an ever-shifting population of relatives, friends, and feline strays.
Posted by Sarah Mäkelä at 12:00 AM