Making It Magical
by Karen McCullough 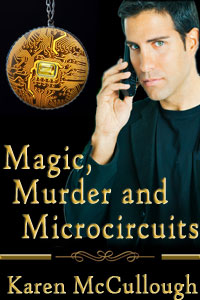 I don’t write straight romance novels, but almost all of my books include some level of romantic interest. My most recent release, MAGIC, MURDER AND MICROCIRCUITS, a paranormal romantic suspense, actually includes more romance than many of my books.

Having characters who are wizards, and powerful ones, presented some interesting challenges in writing the story. Magic has been a part of who they are all their lives, so of course it spills over into their relationship as well. It’s not just a feature of how they interact with their world, it’s a special feature of how they relate to each other.

At the beginning of the book, they’re reunited after being apart for twelve years. Each feels betrayed by the other due to the circumstances of Michael’s departure when he and Ilene were both teenagers, so their meeting is fraught with tension.

During that first meeting Michael can’t resist teasing Ilene a bit, reminding her of what she lost all those years ago. It has the advantage that Michael’s housekeeper, who’s in the room with them can’t see it.

A swirl of warm air raced down her arm from shoulder to wrist, just brushing over the skin. Small hairs stood up along its path. Her blood heated and skin tingled with a series of tiny shocks where it touched. Michael's magic, damn him.

She looked up and gazed straight into Michael’s eyes. The spokes of varying shades of blue fascinated her as always, but the expression on his face was even more compelling. Admiration, need, desire, even longing showed so clearly she wondered if he realized how much he gave away. Need for her. The intensity of it frightened her.


Given what she saw, it didn’t surprise her when he lowered his head and his mouth came down on hers. He kept it very gentle at first, barely touching his lips to hers, leaving her free to pull away or not respond. But lively tingles of energy roused where his mouth touched hers. A different sort of magic made her nerve-endings dance and sent streams of heat flowing along her skin.

Given all the heat between them and the power each wields, the first time they make love has to be special—and spectacular. Here’s a small taste:

She couldn’t remember how they ended up on the bed. He reached over to switch off the light. She protested, but he said, “Wait and see.”


His power brushed over her, along with his hands, a light skimming of energy that tingled along her skin. Tiny lights glowed along the paths his fingers took. She gasped in pleasure, both at the way they looked flickering over her skin and the tiny, fiery blast of sensation released when each sank into her.


He released a new set of lights and cast them around the room. The bright, miniature stars glowed a variety of colors as they floated in the air, dousing them both in a fireworks starburst of radiance that didn’t fade or go too far away. Their twinkling shine cast odd, lambent puddles of light on faces and bodies.

I hope I was able to weave it all together – plot, characters, magic, romance, and suspense, in a way that makes the story magical as well.

The wizarding powers-that-be fear the repercussions of such a device and send his former girlfriend, an accomplished wizard herself, to retrieve the device or destroy it…

When the shield is stolen by the magical mafia, Ilene McConnell and Michael Morgan have to set aside their differences and work together to recover it. Michael claims he needs the device as insurance against the kind of injury and injustice he suffered once before. Ilene maintains its potential to upset the delicate balance of power makes it too dangerous and that it needs to be destroyed. But none of that will matter if they can’t retrieve it before a ruthless, powerful wizard learns how to use it for his own ends.

Karen McCullough is the author of ten published novels in the mystery, romantic suspense, and fantasy genres and has won numerous awards, including an Eppie Award for fantasy. She’s also been a four-time Eppie finalist, and a finalist in the Prism, Dream Realm, Rising Star, Lories, Scarlett Letter, and Vixen Awards contests. Her short fiction has appeared in several anthologies and numerous small press publications in the fantasy, science fiction, and romance genres. Her most recent releases are MAGIC, MURDER AND MICROCIRCUITS, a paranormal romantic suspense now available in most electronic formats, A GIFT FOR MURDER, published in hardcover by Five Star/Gale Group Mysteries, and the re-released ebook of A QUESTION OF FIRE. She invites visitors to check out her home on the web at http://www.kmccullough.com and her site for the Market Center Mysteries series, http://www.marketcentermysteries.com