Blood of the Demon
by Rosalie Lario 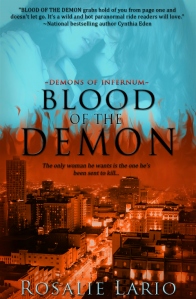 DEMONS OF INFERNUM - Book One by Rosalie Lario

Keegan lives to exact revenge on the evil demon who sired and abused him. When his father devises a plan to bring on the apocalypse, he and his three half-brothers, interdimensional bounty hunters for the Elden Council, are charged with capturing and delivering their father for punishment.

Art gallery owner Brynn Meyers has no idea that her ability to read memories embedded in objects and drain people of their life force means she has demon ancestry. Unfortunately for Brynn, she’s also the key to raising an ancient zombie army, which puts her on every demon’s Most Wanted List.

And no one wants her more than Keegan’s father.

Keegan must protect Brynn from his father by any means necessary, but he’ll have to learn to harness the other half of his genetics—the far deadlier, uncontrollable half—when he starts to fall for the one woman standing between him and the vengeance he so desperately seeks. The one woman he’ll never be able to resist.

She wasn’t what he’d expected.

Keegan crouched on a nearby roof, watching, waiting for her gallery to clear out. A stray gust of cold wind whipped through the night air, ruffling his jacket. It didn’t matter. Considering where he’d come from, the cold was a welcome relief.

The woman had looked fragile when he’d caught a glimpse of her through the store’s large window front. Undeniably beautiful, with her long, honey-brown hair falling in waves around her heart-shaped face—but fragile nonetheless.

It was the perfect cover. No one would ever believe what she truly was, what lived inside her. But the blood never lied. She wasn’t what she seemed.

Despite the gravity of the situation, Keegan had felt a stirring of lust rise within him at the sight of her, blindsiding him with its unexpected force. It had simply been too long since he’d gotten laid, something he’d have to remedy soon. Didn’t have anything to do with the woman. It couldn’t.

After all, she might very well be dead by the end of the day. Because if he received the order, he’d have to kill her.

He fished his cell phone out of his jacket pocket and called his brother. As expected, Taeg answered on the first ring. Skipping the useless chatter, he said, “I’ve got an eye on the target.”

“That’s perfect.” Even over the phone, the relief in Taeg’s voice was palpable. “What now?”

“You don’t think Mammon has managed to find her yet, do you?”

Keegan gave a short laugh. “If he had, he would’ve taken her already. Waiting’s not his style.”

“I’ll keep you posted.” He hung up without waiting for a reply.

Even though he couldn’t see her from this vantage point, he wasn’t worried about losing her. Not after he’d tagged her scent. He closed his eyes and inhaled, giving himself over to his sense of smell. Sorting through the various odors he’d picked up—the rich aroma of coffee, the ashy smell of a discarded cigarette, the pungent stench of rotting food—he discarded them, one by one.

Yes. There she was. Her scent was unique. Like strawberries and cream. Something he’d tried only recently and discovered he loved.

Would she taste just as sweet?

Shit. What was he thinking? She wasn’t a potential lay, but a dangerous and powerful weapon. Maybe even the enemy. He’d do well to remember that.

Finally, the store emptied of everyone but her. He supposed the right thing would be to go in and question her. But what if Mammon was no more than a few steps behind him? He couldn’t take that chance. Not when the stakes were so high.

He would take her back to the apartment with him. There, he could question her at leisure and decide what to do without having to worry about Mammon or his henchmen discovering them. But what were the odds of her going along with him willingly?

Well, he couldn’t worry about that now. He’d simply take her.

The night had grown dark enough that he didn’t bother heading for the roof exit. Instead, he walked to the side of the building facing the narrow alleyway and stepped off. He landed the six-story fall with a thud that shook the ground. A cracking sound, followed by a twinge of pain shooting up his right leg, made him pause, but he ignored it as the fissure healed itself. The homeless man lying unconscious in a puddle not ten feet away mumbled and stirred before growing still once again.

Keegan crossed the street, his gaze singlemindedly locked on the figure of the woman visible through the window as she buzzed about the front of the gallery. A ray of light from a small lamp decorating the window caught her hair, spinning it into a web of gold. In that lighting, she looked almost like an angel.

But why was he thinking about the color of her hair? She wasn’t an angel—not by a long shot.

And her luck was about to run out.

“This thrilling new series mixes danger with demons and romance with rocket-paced action! I can’t wait for the next one.” ~ Alyssa Day, New York Times bestselling author


“BLOOD OF THE DEMON grabs hold of you from page one and doesn’t let go. It’s a wild and hot paranormal ride readers will love.” ~ National bestselling author Cynthia Eden


“The hot and wild fusion of demon, dragon, and desire had me burning through the pages!” ~ Jessa Slade, author of Vowed in Shadows
Posted by Sarah Mäkelä at 11:26 AM