Hey everyone! Sorry I've been so quiet here on my blog. I've been pretty busy, and today's news is one of the reasons why. I'm very excited to announce that Skin Deep is now available on Amazon, Barnes & Noble, and All Romance eBooks! Hooray! 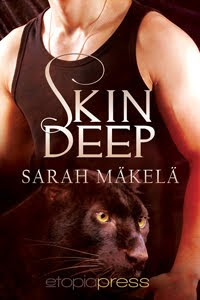 Angelique wrapped her arms around his neck, sinking into the warm sensation that being around Connor stirred inside her. She froze, knowing this might not be what was best for her, but with him being here—so close, and apparently so ready too—she didn’t know if she had it in her to turn him away.

Connor pulled back a little, concern darkening his eyes. “Tell me if you don’t want this.”

She opened her mouth to refuse him, to distance herself, but the words wouldn’t come. What was the problem with giving in? She leaned forward, pushing her fingers into his dark blond hair. Her lips met his, and he groaned.

He gripped her hips, tugging her forward on the counter, pressing her close to him. Close enough to feel his hard cock hiding beneath his suit pants. They’d never gone this far before in their relationship. She hadn’t let him get close because of Kira, but Kira wasn’t a problem right now.

Angelique smiled against his lips and pushed off Connor’s suit jacket, letting it fall to the kitchen floor. He stepped back a little, grabbing for her jacket. She let him unzip it and toss it to the floor next to his. His hands brushed over her torso from just under her breasts, over her stomach, and down to the hem of her undershirt. She sucked in a breath as his warm hands met her skin.

He slowly slid the top up and watched her face. She should stop him, but she didn’t want to. Sharing this with him, regardless of what came after, would be a delicious birthday present.

She lifted her arms, and he slipped the shirt over her head, revealing her bare chest. She’d been at home for the night and hadn’t worn a bra.

His eyes burned with lust, and she noticed a tick in his jaw as if he were struggling to control himself. He didn’t need to think she was made of glass. This wasn’t her first time.

She tugged his shirt out of his pants and worked the buttons from the holes. Underneath the silk was a finely chiseled chest. His workout regime must be relentless.

Connor chuckled, and she glanced up at him, cocking an eyebrow. “What?”

“That look on your face. You’re almost drooling.” He smirked. “I like that.”

Connor’s chuckle faded and turned into a groan. He planted his hands on the counter beside her knees, staying there and not moving away from her lips. “I want you, Angel.” His husky voice was a near whisper.

Amazon
Barnes and Noble
All Romance Ebooks
Posted by Sarah Mäkelä at 12:26 PM No comments: