She struggled beneath him, her cheeks flushed and chest heaving. Several necklaces – silver chains with various charms and a piece of leather tied around a feather – drew his gaze to her pale, slender neck. A neck he could sink his teeth into. He liked the look of her underneath him far too much. Two hundred years without a woman…why couldn’t Ares just have had him flogged?

Reluctantly, he did. “You’d be more than squished had I been someone else. Your stance is too narrow. That’s why you fell over so easily.”

She scowled at him and straightened her clothing. “Don’t tell me how to fight.”

“Then stay behind me and I’ll do it for you.”

Gods, she was a saucy thing. Repressing a smile, he picked her sword up off the ground. “Spitfire and ambition will only get you so far, Samantha.” He held out her sword. “Knowledge and patience are the foundation for success.”

“My sister doesn’t have time for me to be patient.” She started to put the sword back into its sheath.

“No.” He grabbed her wrist and, under her icy glare, he positioned her sword arm out in front of her. “Widen your stance.”

She tossed him a dirty look but did as he said.

He walked a circle around her. “Good. Now scan.”

She looked left then right. “Clear.” She took a step forward but he grabbed the back of her shirt and tugged her against his chest.

“Never forget the sky,” he rasped against her ear.

Her breath quickened and he could hear her heart pound wildly. She looked up then whispered, “Clear.”

“Good. I can’t use a dead witch so try to keep yourself alive, yes?”

“I suppose I can try,” she answered drily.

Deemed “trailer trash” by humans and the daughter of the most disgraceful family of witches and warlocks since the Puritan age, Samantha is used to fighting her own battles. When her younger sister is taken to the Underworld, Sam doesn't hesitate to rescue her.

To survive the harsh land, she makes a deal with a demon — the most dangerous of creatures in the realm.

Even with those lustrous horns, Geo is as hot as the hell she's stuck in. Fighting nasty beasts in a supernatural version of the gladiator games is easy compared to falling in love with a man who has no future to offer. 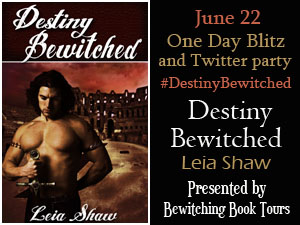 I began my writing journey while I was stranded at the airport waiting for my delayed flight. I browsed the Border’s kiosk and grew frustrated that I couldn’t find the “it factor” — the perfect combination of alpha male-ness, ass-kickery, strong females, magic, and sex.

So I spent the next four hours on an airplane writing my first book on scraps of paper and an airsick bag (which thankfully I didn't need to use).

Now I spend too much time in my head, plotting evil villains and the hot men (and women) who ruthlessly kill them. I think far too much about fae politics, dragon power games, and how fast werewolves can change forms. But writing my paranormal romance series has given me a productive place to express those dark places in my mind.

I live in New England with my husband and two kids. Though I will go to my grave denying it, my husband insists I would be thrilled if he suddenly sprouted fangs.