Excerpt from Interview with the Jewish Vampire

“So nu?” said the vampire thoughtfully as he sat down next to me at the Mitzvah bar on Orchard St. “You must be Rhoda?” He’d picked me out of a line-up of twenty-something’s. I didn’t know whether to be flattered or insulted.

We had met through JDate. I was a Jewish divorcee of forty-one who claimed to be thirty-five and might be considered zaftig if you defined that liberally. He had been dead for a long time but I didn’t know that right away. I just thought he was pale. An undead double for Jeff Goldblum, he was tall, slender, with a mischievous smile, flashing green eyes and long black hair. His incisors were kind of pointy when he smiled and his skin was pasty white, but that didn’t put me off. Everyone looked pretty sallow in the dead of winter in New York City. I immediately wondered if I could drag him off to my lair later that night.

Despite the fact that I had a pretty face, I didn’t get a lot of action on JDate because I had checked “a few extra pounds” in the body size box. “A few” was an understatement, which is why I always met dates at night in bars. I wore black and got there first so they would see me sitting down. My face was a lot slimmer than the rest of me. Jewish guys were the worst when it came to weight—and everything else. Only a Jewish supermodel who ran a law firm was good enough for the Jewish princes I met on JDate.

I was perched on a barstool too teeny to accommodate my rear end, which spilled over the edges. I peered at everyone else's barstools and felt worse seeing all those visible edges. I decided that from now on my goal in life would be to sit on a barstool and be able to see the edges. I tugged on my low-cut tunic top trying in vain to hide the bulges between chest and crotch which seemed to have a mind of their own, ballooning out despite my best efforts. At least I was showing some cleavage, my best physical attribute. He rescued me from what was rapidly becoming a severe fat attack.

“So, you’re a journalist…” he said, putting his elbow on the bar and turning towards me. I had listed that profession on my profile. “Do you have a tape recorder with you?” he asked, not realizing I suppose that tape was so last century and reporters now carried digital recorders.

“Why do you ask?” Men had asked me a lot of strange opening questions on first dates but whether I had a tape recorder was not one of them.

“I would like to tell the story of my life.” He leaned forward and gave me such an intense look I had to turn away. “Would you be willing to interview me?”

No, I wasn’t interested in the story of his life. I was interested in getting to know him in a more biblical sense. I figured he was just another narcissistic celebrity wannabe. As a writer I was constantly getting hit on--not by attractive men--but by people who thought their lives were so fascinating they would make surefire bestseller material. All they thought they needed was a writer to tell their story which, of course, I would be thrilled to do on spec because they didn’t have any money. None of them realized that writers are not charitable institutions.

“You will want to write my story,” he said urgently, “You’ve never heard anything like it before. It will make you rich and famous.”

“Sure, sure. So what’s so special about your story?” I asked wearily, disappointed that he was only interested in my writing skills, not my body.

“I’m a vampire,” he said matter-of-factly.

“Sure, and I’m the Queen of the Damned.”

“What will convince you?” he asked.

“Hmm. Hold on a minute,” I said, playing along. I dragged a cross out of my purse, which I happened to have because I’d visited St. Patrick’s Cathedral with my niece earlier that day and got one for free. I held it up in front of him.

“I’m a Jewish vampire. Doesn’t do a thing for me.”

“How about a Jewish star?”

“Don’t be silly, only Christians are afraid of the devil.”

I dragged out a mirror and held it in front of his face. No reflection. He said Ah and the mirror didn’t fog up. When he opened his mouth I saw that his long incisors were, in fact, fangs. I shrank back, not thrilled about the notion of becoming dinner. I looked more closely at him, noting that like Anne Rice’s Louis, he was utterly white and smooth, as if he were sculpted from bleached bone, with brilliant green eyes that looked like flames in a skull. Unlike Louis, however, he was not wearing a finely tailored black coat but an overly long shlumpy one that looked like it came from the nineteenth century without a stop at the cleaners along the way. His full black hair, with waves combed over the tips of the ears and curls that barely touched the edge of his white collar, made me long to touch it. He was one handsome dude although his wardrobe could use some help.

He certainly had piqued my curiosity, so I decided to go ahead and interview him. If he really was a vampire I’d have the scoop of the century, if anyone believed me. If not, at least I’d have the opportunity to flirt with a good-looking guy. Maybe I should have been more frightened, but I’d interviewed many dangerous types, including serial killers, so I was pretty nonchalant about the risk involved. Plus my life had been seriously lacking in drama lately and here was an opportunity for a little excitement.

I pulled out my pen and started making notes.

“Wait a minute,” he said, sounding upset. “I thought you were going to record this”

“I am recording it. This pen is a digital recorder.” I showed him my latest reporter’s gadget. “As I write, it records, so I can play back any part I want.”

“That would have come in handy in Hebrew class when I was a kid. I was always getting lost during the rabbi’s Talmud commentary. Too bad I had to use a quill pen.”

He wanted me to give him a pseudonym so I’m calling him “Sheldon” after my ex-husband, who was a bloodsucker if ever there was one.

“Vy not a vampire? Vy a duck? Just kidding. I miss Groucho. We used to hang out at Grossingers in the heyday of the Borscht Belt.”

I laughed. In addition to being a hottie, he was a regular vampire comedian. You never know what will turn up on JDate.

Interview with a Jewish Vampire
by Erica Manfred

The last thing zaftig middle-aged journalist, Rhoda Ginsburg, expected when she signed up for JDate was to fall in love with a vampire. But when she meets drop-dead gorgeous Sheldon, a Hasidic vampire, she falls hard. She rationalizes that he may not be alive, but at least he’s Jewish.

She learns that back in the nineteenth century Sheldon was a rabbi who was turned into a vampire by Count Dracula, an anti-Semite who got his kicks from turning Orthodox Jews into vampires because then they’d have to drink blood, which isn’t kosher.

Soon after she meets Sheldon, she discovers her beloved mother, Fanny, is terminally ill, so she comes up with the crackpot idea of getting Sheldon to turn Fanny and her friends, known as “the goils,” into vampires.

Once she becomes a vampire, Fanny tires of her boring life in Century Village, Florida, and, seeking thrills, she goes clubbing and disappears into the nightlife of South Beach in Miami. When Fanny and her goil posse “go rogue” and start preying on the young, Rhoda and Sheldon must track them down to keep them from killing again.

Interview with a Jewish Vampire turns vampire lore on its head, proving that not all vampires are young and beautiful and it IS possible to be undead and kosher. 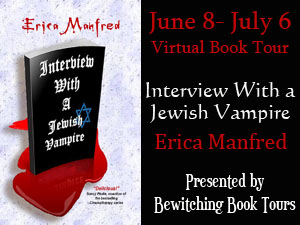 Erica Manfred is a freelance journalist, humorous essayist, and author. Her most recent book is the novel, Interview with a Jewish Vampire. She’s also authored two non-fiction self-help books, including most recently He’s History You’re Not; Surviving Divorce After Forty. Her articles and essays have appeared in Cosmopolitan, The New York Times Magazine, Ms., New Age Journal, Village Voice, Woman’s Day, SELF, Ladies Home Journal, and many other publications. Erica lives in Woodstock, New York with her Chihuahua, Shadow, and her daughter, Freda. Brought up by Jewish parents who spoke Yiddish but avoided religion, she got her Jewish education at the Woodstock Jewish Congregation which welcomes Jews from all backgrounds, from atheist to Orthodox, to vampire. Her website is www.ericamanfred.com, or visit www.jewishvampire.com
Posted by Sarah Mäkelä at 12:00 AM