Hey everyone! I'm very excited to announce that Blacklist Rogue, the third book in my Hacked Investigations series, is now available for purchase! This book downright kicked my butt at times, and I'm thrilled with its outcome.

Here's the blurb, excerpt, and buy links. Also, make sure to subscribe to my mailing list by the end of the day since I'll be sending out a newsletter tomorrow. :-)

Thanks for sharing in my exciting release day! I'm also hanging out TRS's Party site today. I'd love to see you there! 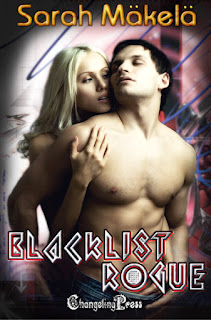 When MAX Home Security tries to hire their private investigation firm to prove the corruption the company is on trial for occurred without the knowledge of the upper management, Ian and Hannah are reluctant to help.

Unfortunately, MAX's legal team thinks it looks good for their PR to have Hacked Investigations involved, forcing Ian and Hannah's hand. But Ian's headaches are getting worse, and Hannah and Ian will have to rely on each other even more if they stand a chance of getting out of this mess alive.


Ian Bradley hit send on an email to one of Hacked Investigations' frequent customers. This time, the business owner had needed him to check on his future partner to make sure there wouldn't be trouble if he signed the partnership agreement. Ian had the potential business partner's email hacked in no time, and within five minutes, he'd completed his task.

The client was paranoid, and, even if Ian thought those types of assignments were frivolous, he had a paycheck on its way.

Slender, feminine arms wrapped around his chest as Hannah hugged him from behind. Her lips brushed his earlobe, and her velvety tongue slid along the edge of it. "Now that we've wrapped another case, how about we celebrate?" Her voice was a low purr.

Hannah nibbled his neck, and he groaned. She pulled away, trailing her fingertips over his chest and shoulder.

Swiveling in his chair, he watched her saunter toward the bedroom. Once she got to the doorway of the bedroom, she looked back at him, giving him a seductive smile.

Ian grinned and then spun around to face the computer. He changed the password again, tweaking the system's safety features, and shut it down.

From the living room, he heard Bernard, the pint-sized gnome, talking in hushed tones entirely different from his usual loud, obnoxious demeanor.

The urge to see what mischief Bernard was getting into nearly drove him toward the living room, but Hannah's sexy smile won out. He headed toward the bedroom, thinking of the things he'd like to do to her. His hand was hovering over the doorknob when the phone rang.

Sighing, he walked to the office phone, but it fell silent. From the other room, Bernard spoke in an annoyed, yet strangely husky voice. "Uh huh. Well, buster, I don't care who you are. There's someone important on the other line giving me some, uh, juicy details about something," Bernard said. He had a slight manic pitch that always grated on Ian's nerves.

Reaching for the phone and fearing the worst, Ian hoped whoever had called their business line wasn't already completely insulted by Bernard's behavior. He mentally made a note to keep Bernard caged when at all possible.

"Oh, stop your whining. You can call back later." Impatience picked up in the gnome's voice as did his volume.

Ian barely managed to pick up the office phone as he heard the other phone slam onto the receiver in the living room. "Hello? Anyone there?"

"Ah, Ian, hello. It's been a while." Senator Kendall's voice came through clearly.

"Hello, Senator. How can we help you?" Ian said, remembering the trial by fire the three of them went through with MAX Home Security after their first meeting not long ago.

"Who was that? A new assistant?" The senator sounded both intrigued and insulted. "Never mind. You need to know about what's going on. So far, my team has brought the corruption suspicions up to middle-management level, but we're blocked from going to the executive level." He let out a harsh sigh. "All leads we have point to a separate operative within MAX who has worked outside the executives' knowledge. Or so they say. There are rumors about a side project. Something that would make the current fiasco seem like playground material. I don't have details yet, but there's a lot of money from the yearly budgets we cannot trace. Company meetings and trips without receipts, cargo requests of military grade equipment reported as lost in transit, and much more. There are people who have their signatures on documents they claim to have never seen or signed. Some people who haven't worked for the company in years."

"You're kidding." Ian couldn't believe what he was hearing. He'd known his former employer was no good, but this... It was almost more than he could imagine.

The senator chuckled, but there was no humor in the sound. "What's worse is money coming from sources they have marked as trade secrets, meetings around intellectual property and business licenses. MAX doesn't provide licenses to the public, which makes it even more suspicious. When we try to question them about it, we get shut down about speculating on things not relative to the trial."

"So, the executives are playing cloak and dagger games? Pushing the blame down and claiming they had no idea?" he asked.

"Exactly. And with MAX Home Security being such a large company with so much influence and power, other politicians are treading lightly, fearing the collapse of a global trillion-dollar company. 'What's a little corruption to spare ourselves another collapse?' That's the word going around. Anyway, the former president of the company is clearly outraged. With the company having been in his family, his children work there in various positions. The old man strongly believed his children should get no special treatment and needed to work their way up the chain, so to speak. One of them, Johann Li, reached out to my office to ask how he could help save the business from all this."

Ian frowned. This had become more complicated than he ever dreamed. He knew there wasn't a good side to MAX. They'd tried to kill him and Hannah, but what he really wanted to know was why Senator Kendall had called. Why share these details with him?

He had opened his mouth to say as much when he heard a door open. Hannah leaned against the doorframe leading to his bedroom, concern creasing her brows together. He held up a finger, then returned his focus to the senator, who was still talking.

Ian cleared his throat. "Excuse me for a moment, Senator, but what exactly is it you want me to do?"

Senator Kendall sighed. "I'm calling to warn you. You'll be receiving a call soon. You'll know what I meant then."

Buy now: http://changelingpress.com/product.php?&upt=book&ubid=1821
Posted by Sarah Mäkelä at 10:34 AM