In 2001, a little movie called “The Lord of the Rings: Fellowship of the Ring” hit the big screen. During that three hour stretch in a dim theater, I munched happily on popcorn and fell in love all over again.

I’d fallen for its predecessor, “The Hobbit”, many years before, when I wore out the little 45 record that came with an abridged children’s version of J.R.R. Tolkien’s classic tale. I adored Bilbo. My heart sped as I listened to the gravelly-voiced narrator describing the terrified hobbit’s trek into the dragon Smaug’s lair. No matter how many times I listened and read along, the story captivated me, even when the record skipped at every other paragraph.

And back at the theater in 2001, when Orlando Bloom tossed that long blond hair (ok, I know it was a wig) behind his shoulder, raised his bow, and drew the string back toward his pointed ear, I fell in love with Legolas.

Actually, I fell in love with elves.

Through a trilogy of films, Tolkien’s immortal characters were resurrected by director Peter Jackson’s genius. One might imagine my giddiness over the first installment of “The Hobbit” coming out this December. Yet, as I read the books and drooled over Legolas in the films, I knew something was missing.

I didn’t know what that something was until 2009. In that eight-year span, I quit my job to become a full-time mom, moved to rural Western Kentucky, had two more babies, and became hooked on roleplaying games like Everquest and The Elder Scrolls. In those games, I came to realize what I’d missed in Tolkien’s version of fantasy—the elves!
Yes, there were elves, but I wanted more of Galadriel, Arwen, and Legolas. I wanted more than their portrayal as perfect, whimsical beings. I wanted to get behind the scenes to see what secrets lay in their tidy closets.

And that’s when I started writing. It began with me writing about the elven characters I played in computer games. One of the stories about a dark elf sparked something special. I decided to break away from the fan-fiction slant and create my own fantasy world. After much rewriting and editing, I submitted “Let There Be Love” to Midnight Showcase Fiction (now Melange Books), and they accepted it right off the bat.

From then on, I had my motivation. Freedom, in the form of my very own creation, not confined to someone else’s vision or a game’s pre-set lore. In my world, which came to be called Tallenmere, I held the reins. I could dive headlong into stories where elves were at the forefront, and not just charming minor characters. They would experience passion, anger, jealousy, violence, and treachery just as any human would, with some necessary differences, of course, to give them a unique spin.

So that’s where I am today, carving out the world of Tallenmere one elf at a time. I hope you’ll come along with me on this journey. But beware—you just might fall in love, too!

In the fantasy world of Tallenmere, no one ever said love was easy...

Serenya Crowe may be a half-elf commoner, but she's no ordinary woman. With the ability to interpret dreams, and a birth defect that forces her to wear gloves, she’s endured small-town gossip and the cruelty of her husband, Sebastian, The Earl of Summerwind. All she's ever wanted is to live a quiet life and raise a family. When she meets the new stranger in town, her world and her heart, are turned upside down.

Wood-elf Jayden Ravenwing is an ex-secret agent who wants nothing more than to forget matters of the heart. He left the bustle of Leogard and his failed marriage to make a fresh start in Summerwind. He never planned to fall in love again, especially with the enchanting Serenya Crowe.

When a strange portal opens on the Crowe property at the edge of town, Jayden is thrown into an investigation, knowing that if he fails, Serenya and everyone in Summerwind may die.

Together, he and Serenya must overcome an ancient evil, and their own inner demons, to save Summerwind and find the love they've always dreamed of. 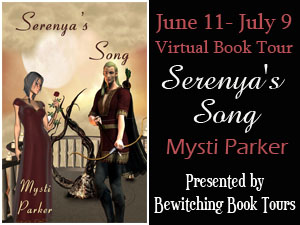 
Mysti Parker is a full time wife, mother of three, and a writer. Her first novel, A Ranger’s Tale was published in January, 2011 by Melange Books, and is the first in a fantasy romance series. She is also the proud writer of Unwritten, a blog voted #3 for eCollegeFinder’s Top Writing Blogs award.