Hey everyone... Sorry for the delayed post today. I've been pretty busy. I can't think of anything interesting to say today, so I'm going to plug one of my critique partners' upcoming books. Enjoy! 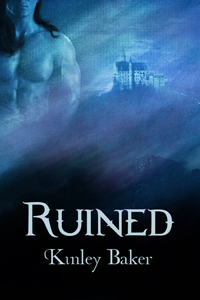 Jessa is one healing away from death. Under the thrall of her gift, the Court's Senior Healer risks giving her life in exchange for her patient's.

Vale is a rebel ruler. When his brother is killed, he's given the throne and the decree from the Court to produce an heir or lose his family's hold on the land--and his deceiving advisors aren't afraid to use murder as a weapon if their directive to stay away from the Senior Healer goes unheeded.

But Vale burns to possess Jessa. The heat between them leaves a wake of smoke, and even the powerful forces above want to bind them in a union that lasts forever. Vale taking another would be a betrayal neither could survive.

Their enemies fear a child born of such a powerful Healer and Warrior, but the true threat lies in the bond forged in shadows and fused in fire.

"You." Fury burned hot under Jessa's skin as she glared at Vale. "Who do you think you are, demanding I come live in this castle? You can't just order your guards to enter a woman's home and pack up her things."

"Well, I did." Vale came around the desk and propped one hip against it, more of a threatening than casual movement.

"Someone tried to kill me. It makes sense that I have my Healer close by."

She released a pent-up breath. "Why couldn't you have explained that instead of mandating?" Silly. Her imagination had run away with her. The king needed his Healer. But the realization he didn't want her made her angrier.

"Because I didn't want to give you the option of saying no."

She most definitely would have said no.

"If you would have explained your reasoning, I would have complied. Your safety and health come first, even if I-"

"Loathe you." She bunched her fingers into two fists, seriously tempted to hit him. For all the nonexistent pain it would inflict upon him.

"Do you?" His tone deadened with calm. "Because I can't stop thinking about you."

"That's normal." She brushed off the claim. "I saved your life."

He moved in a blur. A true Shadow Shifter. One second he stood near his desk, the next he had her in his arms, one locked around her waist and one hand tangled in her hair. Their lips almost brushed.

"I can't stop thinking about you." His murmur played down her spine, leaving a tingling trail. His scent invaded her. His voice embraced her like bare skin against satin sheets.

She disliked him, but didn't want him to let her go.

"Have you been thinking about me?" His soft tone feathered over her flesh.

"Only how much I dislike you." Lust pulsed in her belly.

He pulled her head back gently by her hair, so they looked straight into each other's eyes. Their bodies pressed tightly together. "Liar."
Posted by Sarah Mäkelä at 5:07 PM