Woo! I have the official excerpt for Jungle Heat. Enjoy, and let me know what you think! It comes out tomorrow. 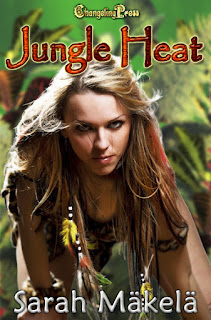 Adara raced over the dense forest floor, trying to escape the shadow closing on her heels. Fear pumped adrenaline through her body as she ran toward her village through the darkness. Panic tangled with the sheer need to survive. If only I'd listened. What was I thinking, coming out alone?

She shot a glance over her shoulder. Her foot smacked against a tree root in the moment of distraction, pitching her body forward. The fall came in slow motion.

Cursing under her breath, she rolled onto her back. Dry leaves clung to her blonde hair. The subtle, musty scent of slow rot rose from the rich soil, mixed with something coming from behind her. The dark shadow loomed. Her gaze rose to take in her pursuer, wondering if the beast would be her doom.

The tall, broad-shouldered creature towered over her. Watching. It wasn't human or animal. The village wise woman had warned her of beings like this, but they'd seemed like fables. How could something so fantastical be real?

Even as she trembled with fear, this creature captivated her. The black and orange stripes covering his shoulders and arms evoked a distant memory, yet the design was uncommon in the Amazon.

His hair hung in straight, black strands like a human's, but his face had the nose, mouth, and eyes of a feline. His muscular, naked body reflected a splendid combination of both species. Sweat-shiny skin glistened through the inch-long fur that covered him. His white chest intrigued her, all the way to the patch of fur barely covering his groin. Leaves and branches framed his face with a lush green background. He crouched over her. His piercing golden eyes focused solely on her. His stare reminded her of a cat from her village staring at a small rodent before pouncing.

As he leaned down, she grabbed her kris from the garter on her thigh and pushed it against his stomach. She didn't want today to be the day she died. Her people needed her. She wouldn't let this beast deny them their princess.

The animal cocked his head at her. He brushed his lips over her throat, whiskers tickling her chin.

Her body stiffened. What is he doing? Bewilderment spread through her as his feline lips touched her neck. Instead of biting her, his canines grazed lightly, gently, from just below her ear down to her shoulder, almost as if exploring her flesh, instead of seeking to rip open her throat.

She tensed. Even with her weapon pressed against the beast's stomach, she still feared for her life. As an Amazon princess, she wasn't easily scared. But this feline made her heart pound. If only she had brought Rubia with her. She wouldn't be in this situation and could've stood a better chance against this feline.

Why does he persist in toying with me? Adara swallowed as a low burn started in the pit of her stomach. These feelings confused her.

A soft sniffing sounded in her ear right before his tongue scraped rough caresses on her skin. Other jungle cats marked their territory. Did this animal believe she was his? She didn't want to find out.

Without waiting for the feline's next move, Adara drove the kris deep into his stomach, meeting resistance as it plunged through flesh and muscle. She forced it further as his blood flowed onto her hands, making the hilt of the kris slick, weakening her grip.

He roared and leapt back with her kris still embedded in his abdomen.

She scrambled to her feet. His scream so near the side of her face made her ear ring. Bringing up a hand to her ear, Adara felt a trail of his wet blood drip along her cheek.

He straightened his spine and strode back to her, her kris still buried in him. It seemed as if it were nothing more than a minor annoyance to him. She clenched her hands into fists and dropped them to her sides.

The reality of what she saw struck her. She froze. How could he act so unaffected? He shouldn't have been able to move around so casually. It wasn't possible. How can I outrun something like that? This can't be happening. Her mother had always warned her to be careful when traveling through the forest. Why hadn't she listened? And how could she feel so drawn to this animal when he intimidated her?

"Who are you?" Gritting her teeth, she forced her voice to resonate with the commanding tones of an Amazon huntress, and fervently hoped it didn't betray the panic racing through her veins. Her people's beliefs restricted them from showing fear in front of strangers. Not that they saw many. But her tribeswomen were survivors in dangerous times. Their history brimmed with reminders.

He launched into the air and, before she could react, flattened her to the ground. Air whooshed out of her lungs. Her eyes widened and locked onto his.

He pinned her arms next to her head and pressed his feline lips to hers. His tongue scraped across her lower lip, causing nips of pain to cut through the alluring sensation.

She shook her head hard, breaking the kiss. Her breath rushed out short and quick. Never before had she kissed anyone. His mouth on hers created fiery stirrings within her body that felt almost too good. Her racing pulse only spread the warmth throughout her body that much faster.

Twice a year, her tribeswomen associated with Indian men. The younger girls were forced to stay in a hut during those visits, although Adara had snuck out once with Rubia in a fit of rebellion. She'd spotted one of her kin pressing her mouth against an Indian male's. Could this be what happens?

But men weren't to be trusted. Her kin had learned that the hard way many, many years ago.

Her mind flashed to the tales she'd heard from the wise woman. Horrible reminders assaulted her, memories of the men from long ago, enslaving her kind, killing them ruthlessly with diseases and swords.

She could imagine the cruelty of the conquering, pillaging men as vividly as if she had been there herself, so strongly had the wise woman spoken. It had taken weeks for her to sleep soundly after listening to that story.

Sudden panic swept away the lust that burned inside her. This creature could do the same. He's chased me, after all.

"What do you want from me?" Adara asked, trying to sound forceful, but instead her voice came out husky. She cleared her throat and returned his gaze.

Talking with an animal! Rubia would be jealous. Her tribeswomen would never believe this story... if she survived the encounter.

Rei smiled, warmth emanating from him. "You." His chest rumbled, and he rolled the word off his tongue like an exotic purr.
Posted by Sarah Mäkelä at 12:50 PM