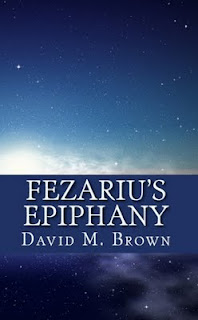 I self-published my first novel, Fezariu’s Epiphany, back in May and while I tentatively await the next reviews and feedback I find myself speculating about which moments readers will enjoy the most. Writing the novel there were scenes I enjoyed writing more than others. The general outline for the novel had been clear in my mind for a while but I found some parts of the book quite tricky to get right. The letters Fezariu sends to Alycea flowed seamlessly onto the page but there is one chapter that stands out above the others for me.

In Chapter 20, “The Embers of Redemption,” Fezariu and his comrades in the Merelax Mercenaries get their first taste of combat when they reach the burning city of Redemption on the northeast coast of Emeraldon. I wanted Fezariu’s first real battle to be something quite memorable and writing that chapter was probably the most fun I had with the entire book. The struggle throughout the city proves costly for the valkayan insurgents, the Eligantian colonists they are trying to overthrow and the Merelax Mercenaries sent to help quell the rebellion.

"Across the expanse were hundreds of valkayan rebels engaged in an epic tussle with the colonists. Fezariu’s charge of Merelax Mercenaries smashed into the side of the closely packed valkayans who were already in disarray from the showers of arrows raining down on them from General Bayard’s archers. When the last of the bow strings came to rest the fate of Redemption was left to be decided by those fighting in the central square."

Chapter 20 leads to an important development in the novel, particularly for Fezariu and the barriers he tries to put up between himself and the trio of comrades – Tessera, Vintaro and Arshea – that he spends most of his time with. Fezariu acquits himself well in his first battle but the romantic visions of the mercenary life he has dreamed about since being a boy are put to the test in the aftermath of this fierce exchange in Redemption.

I barely paused for breath when writing Chapter 20 of Fezariu’s Epiphany and I was very pleased when my wife, Donna, read the novel and couldn’t put the book down when she reached this particular section. To me, that was the justification I needed that I had conveyed the
struggle for Redemption quite well on paper. When writing it I visualised every moment in my head as if watching a film at the cinema and I believe I transferred it as well to the book as I possibly could. 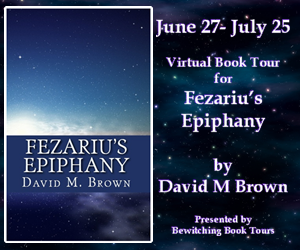