Tales of vampires have been around for centuries. Slowly, they’ve evolved from tales of horror to tales of sensuality and sexuality because vampires are monsters. Beautiful monsters that look like human beings. This sensuality began with Bram Stoker’s Dracula with the title character and his seduction of Lucy, Mina, and of course the brides who seduced and fed from Jonathan. The thing that has never changed with vampires was that they represent death. They are affiliated with something so unnatural that they strike fear. They feed on the living to maintain their static state.

In my novel, Nightingale, the character of Grace Caldwell is a vampire. Where she’s different is that she came from a vampire father (death) and a sidhe mother (life). She’s grown, matured and changed as a living creature ought to, but she’s so intimately connected with death that it frightens her. The first in the Nocturne series, Grace Caldwell creates a juxtaposition even in her own world. Vampires are afraid of her and the Sidhe are confused by her. In the faery world, vampires are walking abominations and reminders of death and she is one of them.

By making my main character a vampire-faery mix, I had to explore weaknesses and strengths. She does need blood to survive, like all vamps, but she doesn’t need it as often. Sunlight doesn’t affect her, like a fae, but neither does cold-iron (very unfae-like).

I think readers will be interested in a world where faeries, vampires, werewolves, and other manner of supernatural cross on a daily basis. Grace Caldwell walks these worlds not like a pro, but struggles through them, and struggles to find herself in them. I think people can identify with it. I think readers will enjoy it as much as I enjoyed writing it. 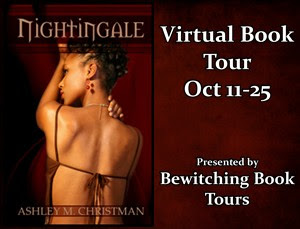 Nightingale
By Ashley M Christman
Being Sidhe is hard, but a Sidhe without a heartbeat?


Life is lucrative and easy for Dr. Grace Caldwell--daughter of vampire father and fey mother--until her ex-boyfriend, FBI agent Jack Montgomery, blackmails her into helping him solve a prostitute's murder. If only she wasn't as attracted to Jack as ever, she could concentrate on finding the murderer and get back to her regularly scheduled life. And then there's the vampire Constantine, seductive and powerful, a family friend she's supposed to marry...


Not much of a vampire, and clueless about her fey powers--if she has any--Grace must journey to the Sidhe and enlist the help of the fey to unravel the riddle of the murder. She and Jack might just get killed, but then, two worlds depend on her success. If she fails, both her worlds and all of humanity will descend into chaos of epic proportions.

As a child, Ashley M. Christman spent many hours in imaginary worlds, exploring the depths of mythology and immersing herself in a breadth of classics. After spending so much time reading, she decided to try her hand at writing.

An avid fan of film noir, she combines fantasy, noir style heroes and heroines, and the paranormal in a modern day setting in such a way that hopefully would make even Bogie proud.

When not writing, she can be found in the wilds of Minnesota enjoying great cuisine, avoiding the gym, and being walked by the dog with her partner, Tom.