V is for Valkyrie 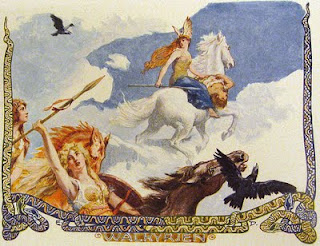 Valkyries, from Norse mythology, are "the chooser of the slain." This comes parts of the Old Norse name valkyrjur with valr meaning "slain on the battlefied" and kjósa meaning "to choose." These warrior women are an ingrained part of the mythology and viking culture.

Valkyrie are fierce women, with blond hair and tall build. Wielding a gilded shield and a sword, trident or spear as their preferred weapon, they are viewed truly worthy of welcoming any brave warrior to Valhalla. They select only the most heroic of the fallen and bring them to Odin.

When not on battlefields, the valkyrie served mead to the fallen in Odin's great hall. They also are usually described as the lovers of great warriors. They are associated with swans and can even shapeshift into them.


Your turn! What do you think about Valkyries? Have you read, watched, or played something with one in it?

Email ThisBlogThis!Share to TwitterShare to FacebookShare to Pinterest
Labels: atozchallenge, into the paranormal, norse mythology