H is for Harpy 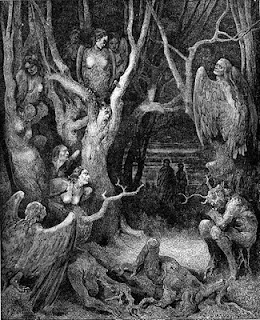 Harpy, from the Greek word harpūia, means "swift robber" or "snatcher." They are personifications of destructive wind. Mostly, they live in areas where the sea is prevalent, specifically the island of Strophades. A harpies appearance includes the head and neck of a woman with the wings, bodies, and talons of a bird. They're cruel, vicious, and very violent.

In tales, harpies fly over their victims, snatch what they want whether it's food or a person, and carry them away from the help of others, or to the underworld, so the harpies can eat. However, if they don't kill their targets, they drive them to the edges of their sanity.

One of the most popular stories featuring harpies is about Phineas. Wikipedia says:


Phineas, a king of Thrace, had the gift of prophecy. Zeus, angry that Phineas revealed too much, punished him by blinding him and putting him on an island with a buffet of food which he could never eat. The harpies always arrived and stole the food out of his hands before he could satisfy his hunger, and befouled the remains of his food. This continued until the arrival of Jason and the Argonauts. The Boreads, sons of Boreas, the North Wind, who also could fly, succeeded in driving off the harpies, but without killing any of them, following a request from Iris, who promised that Phineas would not be bothered by the harpies again, and "the dogs of great Zeus" returned to their "cave in Minoan Crete". Thankful for their help, Phineas told the Argonauts how to pass the Symplegades. (Argonautica, book II; Ovid XIII, 710; Virgil III, 211, 245).

Although, they are often compared to sirens, who sink ships by seducing and luring sailors in with their voices,  harpies have directly opposite approaches to killing. 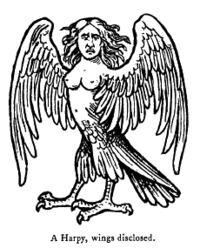 Links:
What are your thoughts on the Harpies? Have you experienced any books, movies, or games with them in it?
Posted by Sarah Mäkelä at 4:46 AM

Email ThisBlogThis!Share to TwitterShare to FacebookShare to Pinterest
Labels: atozchallenge, greek mythology, into the paranormal