D is for Dhampir

Dhampirs are from Balkan (gypsy) folklore. They are born of a vampire father and a human mother. Dhampirs are dual-natured sort of like the Centaurs yesterday. They're forced to walk between their undead side and their mortal side; although, they are more human than vampire. They possess vampiric powers without the weaknesses, but their physical and supernatural strength is less than that of a vampire due to being a half-breed. They tend to be unusually good at tracking and hunting vampires.

Additionally, vampires tend to target dhampirs since they're viewed as a serious threat. After all, during the day a dhampir with knowledge of a vampire's nest is likely able to wipe them all out with little effort. However, once night falls, the dhampirs would need to watch their backs to prevent being hunted in return.

But it's not just vampires dhampirs have to worry about. Typically, they're disliked and misunderstood by humans since they have vampiric lineage. Although, they were taken in by Gypsy communities and hired themselves out as vampire hunters. 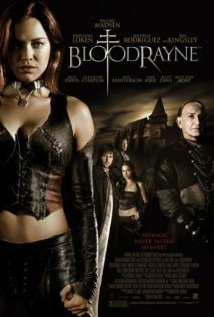 One popular depiction is Rayne from the video games, movies, and comics BloodRayne. (FYI: I've seen the first two movies. I love the first one, but whew, the second one made my wonder why I threw away those 99 minutes of my life. But regardless of that, I'll give the third movie a chance.)

You could say that Blade is a dhampir. While his mother was human, he gained his vampirism due to her being attacked while she was pregnant, not because his biological father engaged in intercourse with his mother. (Although, I think there are variations of this between the comics and movies. I only saw the movies.)

So, what are your thoughts on Dhampirs? Have you read, watched, or played something with one in it?
Posted by Sarah Mäkelä at 8:44 AM