Hello everyone! Please help me welcome Lilly Cain to the blog today.

1. Tell us a little about yourself.
I am from Nova Scotia, on the Eastern Shore of Canada. I have two beautiful, tall, smart daughters, a big family nearby and a comfy house and a tiny cottage in the middle of nowhere that I share with my parents. I have an evil cat (aren’t they all?) and three horrible little hamster rat things. Shudder. Although my bio says I am a wild woman that is just something I play at, in truth I am a quiet nerdy gal who loves sci-fi movies and a good romance.

2. When/how did you know you wanted to write?
I’ve been writing a long time but only became a serious writer after my second child was born and my then husband decided to leave. After I recovered somewhat, I took to writing as a means of therapy, and it helped, especially when I needed to give someone a very bloody ending, LOL!

3. How long did it take you to get published?
I decided I wanted to publish in 2008. I work hard and wrote a book that will never see the light of day. Then I wrote another. The spring of 2009 I sold Dark Harmony, my first book, at the RT conference in Florida and it was published January 2010.

4. What’s your favorite part of being an author?
I think it is exploring things that I am curious about – the research and the writing allows me to do that. Sometimes that means exploring an attitude, sometimes it means finding out about Celtic mythology. :-)

5. Tell us about your newest release, UNDERCOVER ALLIANCE.
Undercover Alliance is the third book in my erotic sci-fi series, The Confederacy Treaty. It’s not quite the end of the series, there is one more, but it is action filled, both in bed and out, as the humans and the Inarrii – the alien representatives of the Confederacy – come closer to a peace treaty that could save our world. In this book we meet an Inarrii warrior whose career is on the out – she was injured in an earlier book and no one expects her to survive. She’s given one last tour of duty as a bodyguard for one of the paper-pushers of the treaty on the human side. She figured it’s a pity post, and perhaps it would have been except the man she’s sent to guard is actually an undercover human spy sent to protect the treaty from the inside. But word leaks and he’s a target, with only his Inarrii bodyguard there to save him…

6. What inspired The Confederacy Treaty series?
Strangely I was watching NCIS, and found myself a little disappointed with the plot (it happens, even to the best of shows) so I started to play what if. What if the girl accused of treason was innocent? What if she fell in love with her accuser and he with her while they tried to prove her innocence? What if he could read her mind? See what she saw? What if they were in outer space?? This became The Naked Truth, which is the second book in the series. After I’d completed a rough first draft I realized there was an earlier story to write, and that it would become a series.

7. Which has been your favorite book to write?
I think Undercover Alliance was my favorite. It was kind of a James Bond experience for me, writing the action scenes and the sex scenes. Lots of fun!

9. What advice do you give to those who are just starting out or trying to become published?
What I tell every writer is…Read, Write, Read, Write…repeat. Make writing and reading (lots of genres!) a big part of your life. 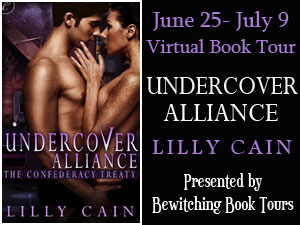 Blurb:
Sarina is scarred. Her L'inar, the curving nerve lines that enable Inarrii to experience their full sexuality, were severed in battle and she can no longer reach completion. Until she accepts a job as bodyguard to the human ambassador John Bennings, and is astonished to discover that they share a mental bond—a mirrored pathway of thoughts that will allow Sarina to climax.

To prove that she is whole and rejoin her Inarrii clan, Sarina needs John to bring her to climax in public in accordance with tradition. With a roomful of Inarrii and humans watching, will John be willing to perform as Sarina needs—and will their public display make John vulnerable to another attack?

Lilly Cain is a wild woman with a deep throaty laugh, plunging necklines and a great lover of all things sensual - perfume, chocolate, silk! She never has to worry about finding a date or keeping a man in line. She keeps her blond hair long and curly, wears beautiful clothes and loves loud music. Lilly lives her private life in the pages of her books.

Lilly lives in Atlantic Canada, although she spent eight years in Bermuda, enjoying the heat and the pink sands. She returned to her homeland so she could see the changing of the seasons once again. When not writing she paints, swills coffee and vodka (but not together), and fights her writing pals for chocolate.