EDIT: I didn't receive Irina's guest post until noon today (Wednesday), but here it is.

An Ancient Strength for a Modern Age
Written by Irina Lopatina,
Author of White Raven: The Sword of Northern Ancestors

When we read historical chronicles that are full of battles, campaigns and conquests with constant sword-rattling, we automatically start to imagine people who lived in the past as a sort of restless giants seemingly forged from metal. Partial enlightment comes when we find the laconic anthropological data: only five hundred years ago average height of a man was no more than 150 –160 centimeters (4’ 9” – 5’2”). That means such a “giant” barely reaches my ear in height. Their physique was even stranger. I remember very well when I stared at the ancient knight’s armor at a museum for the first time. In the best case, this armor could find room only for a modern twelve-year boy. However, there is a nuance – this boy in no case would rise to his feet under the weight of this glittering “piece of metal”

It turns out that our ancestors were very “compact” and capable of great endurance. But we want a completely different picture! Therefore, we can see Alexander the Great, Achilles that looks like Brad Pitt and all 300 Spartans in Cinemas. All this also concerns heroic fantasy that is crowded with brutal characters. No one but real machos should wander over various worlds while defending beauties and all the others they come across, because it is a superhero’s mission!

The White Raven series is no exception to this tradition. There are strong characters there, and they are all different. Unruly, elemental force of the main character (Vraigo) coexists with calm strength of the Grand Duke Vlady on whom the lives of many people depend. Soft courage of the young magus Evstarh faces the resolve and inflexibility of the Duke’s son Tagas. Even Nik, our contemporary friend who finds himself in the epicenter of the ancient battle, shows a fighting spirit.

So, existence really does strengthen character. And we have to admit that our ancestors, no matter how they looked and behaved, carried a supply of power that still attracts us. This power refracts in our subconscious mind, giving us the ability to walk through hardships now and again, in spite of all the modern comforts we have today.

The fate of Areya rests with the lost sword Urart. Will White Raven retrieve it before it's too late?

In the kingdom of Areya, humans, animals, and the magical creatures that inhabit the Eternal Forest have long coexisted peacefully, but now something is horribly wrong. A terrifying stream of monstrous creatures has begun to emerge from the secret depths of the earth, terrorizing all of Areya's native inhabitants. From the tiny, wise drevalyankas to the bellicose cave-dwelling gnomes to the devious kikimoras who gather roots and herbs in the marsh, everyone is in danger.

With the aid of Urart, the magical sword that has been passed down from the time of the ancient northern ancestors, Grand Duke Vlady can offer temporary protection to his people. But Prince Vraigo, Vlady's nephew, who is endowed with magical power himself, understands that the source of the evil monsters must be found if there's any hope of survival. Along with a motley crew of his forest-dwelling friends, Vraigo sets off on a perilous quest in search of the koschei, the powerful, corrupt Archmagus whose mission is the destruction not just of Areya, but of the entire world.

As if this weren't bad enough, Urart disappears from the duke's stronghold. Without it, Areya is doomed, and only Vraigo, the White Raven, can possibly get the sword back. This journey requires Vraigo to use all of his keen wits and magical abilities, as well as to ally himself to dangerous creatures like yagas and werewolves, natural enemies of man, and precipitates the young prince into the most bewildering, complex challenge he has faced yet: life in the twenty-first century. 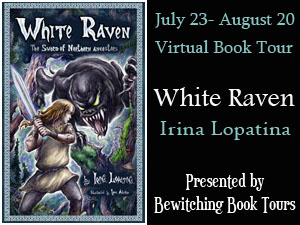 Irina Lopatina lives and works in Siberia, Russia, but her homeland has an even more wonderful and exotic name: Altai. It is a unique place where old Altai Mountains rise high up to the sky, centuries-old forests stretch out as in ages past, and mighty Siberian rivers flow along the plains. Altai is one of the few places in the world where huge, densely populated cities coexist with pristine wild places. Moreover, this is an area of the earliest human civilizations, through which the great migration of people from eastern lands to Europe once took place.

While studying at the Altai State University, Irina devoted much attention to the past of her native land. As a student, she went to the archaeological sites of ancient settlements located on the mountain plateau, where it was only possible to arrive on foot. She remembers moments when it was quite easy to imagine how the ancient people had lived, what creatures neighbored them, and what adventures took place in these vast spaces. Irina needed take only a small leap from there to White Raven, his friends, and his enemies who were ready to begin a journey through the Eternal Forest of Areya.

Of course, it would have been much more difficult for her to create her stories if Irina had not been inspired early on by the works of many excellent fantasy and science fiction writers such as J.R. Tolkien and Ursula Le Guin, the Russian authors Nick Perumov and Svyatoslav Loginov, as well as the wonderfully charming Russian fairy tales where a brave prince, his faithful grey wolf and the evil koschei always live. And so it happens that Irina's novels are the stories of a distant, semi-fantastic land which, who knows, may still exist next door to us.

Even as a child, Igor Adasikov knew that he would be an artist.

While studying at an art school, he devoted much of his time practicing classical drawing, seeking to depict the world around him as fully as possible. His works often won awards in Russian art contests, and he continued his education at Moscow Art Institute. After graduating from the Institute, Igor worked as an artist preferring realistic painting, such as portrait and landscape. However, his rich imagination still needed an outlet and manifested itself in full while illustrating the fantasy novel, White Raven: The Sword of Northern Ancestors.

Here, in the surprising fairy-tale world, void of any boundaries, the artist found the nourishment to feed his creativity. Having traveled with the heroes through the whirlwind of adventures, he worked to give readers a visible image of Areya, bringing to life the magical creatures that inhabit the land, and making friends with the heroes of this fascinating story.

"Areya always needed a blade to protect it, but only a few can truly wield it. White Raven is a fantasy novel surrounding the Kingdom of Areya, enjoying its own harmony. Vraigo, known as the White Raven, knows it is up to him to recover Urart, the sword that blessed Areya with protection for quite some time. As time grows short, Vraigo realizes it all falls to him. White Raven is an excellent pick for lovers of fantasy and adventure, much recommended.” ~ The Midwest Book Review, Small Press Bookwatch: June 2012

You can learn more about Irina's White Raven project and sign up for the chance to win a free copy at whiteraven.lightmessages.com


Irina and White Raven are also on Facebook at www.facebook.com/whiteravenbook
Posted by Sarah Mäkelä at 12:00 AM