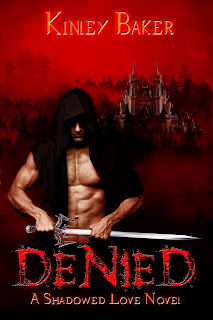 I’ll never forget when my mother read Denied for the first time. She’s a wonderful beta reader because she reads 3-4 romance novels a week, and she’s been to several conferences in her own pursuit to write a novel. It’s great to get her feedback, but this time when she came back with comments on Denied, I had to laugh.

She said, “I can totally relate to your heroine.”

And I responded, “You want to be the first female guard in your kingdom, too?” *Said with the sarcasm you should never use on your mother. Shame on me. My defense is we have a sarcastic family.*

My mom laughed, but then she said it wasn’t just about Tabitha wanting to be a Warrior. What my mother related to most was being told she couldn’t do something and pressing on anyway. I think a lot of us can relate to being told NO. You can’t do this, or you can’t do that. But the brilliant thing about our own personal journeys is that the road is our own. We don’t have to listen to the naysayers, even when we’re close to caving in and believing them.

Tabitha certainly doesn’t listen to the naysayers, but she struggles on a lot of levels to accomplish her goal. Everyone says that what doesn’t kill us makes us stronger, or some variation. What they fail to mention is the part that almost kills us really sucks. It’s so hard to keep running forward at your fastest speed, and then realize you’re still standing in place. I may or may not be feeling like that even at this very moment while writing this guest post. We all need encouragement! Keep fighting on! With a sword, like Tabitha. Or you know, metaphorically like most of us.

And if you ever need a break, you can always read about someone else reaching for the impossible. The characters in the novel might give you the inspiration you need to reach for your dreams.

What is an accomplishment you’re proud of, that people told you you’d never achieve?

BIO:
Kinley Baker is the author of the fantasy romance novel, Ruined. She read her first romance at the age of thirteen and immediately fell in love with the hero and the genre. She lives with her husband and her dog, Joker, in the Pacific Northwest. As a firm supporter of all supernatural lifestyles, she writes fantasy romance, paranormal romance, and urban fantasy. You can find Kinley at www.kinleybaker.com.