Priestess of the Nile
By Veronica Scott

It’s a pleasure to be here today as a guest! I’ve been enjoying your Six Sentence Sunday excerpts for a while!

Here’s what my book is about:


Drawn to his abandoned temple on the banks of the Nile by an enchanting song, Sobek the Crocodile God is even more captivated by the sight of the singer herself. Appearing to her as a man, he learns she is Merys, a descendant of his last priestess. Though filled with lust, Sobek believes Merys deserves to be more than just his mistress. But the rules that govern the Egyptian pantheon forbid anything beyond a physical joining of a Great One and a human.


Merys is attracted to the handsome stranger, who arouses passions in her that no man ever has. But with no dowry and no hope of ever leaving her village, she dares not dream of the future—or love.


Sobek takes every opportunity to visit Merys, taxing his resolve to leave her pure. When he saves her life, their mutual desire must be sated. But can a love between a human and an immortal survive the ultimate test of the gods?

One of the Egyptian deities who appears in the book is the goddess Isis. She’s probably one of the best known members of the Egyptian pantheon even today, revered in ancient times as a mother and a wife, but very powerful, with dominance over magic and all of nature. Her name means “throne” and she was usually depicted wearing a headdress in the shape of a throne to emphasize her position. My Crocodile God, Sobek, has to answer to Isis for his duties in maintaining the Nile River, and she’s not too pleased when he ignores his river tending job for time spent with Merys the Priestess. 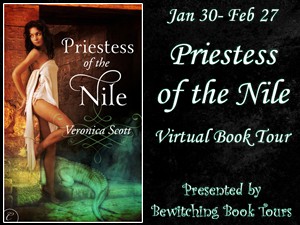 One minute the light was shining on sand and scrub brush and the next minute the queen stood there, tall, silent, swathed in her customary black sheath. He went to his knees in the river, hands crossed over his chest, head bowed. “I did not expect to encounter you here, my lady.”

“What a surprise to find you working.” Scorn burned in her voice. “You have been absent from your duties to my river quite often of late.”

What can I say to that? It’s true. I allowed my fascination with Merys to pull me away from my tasks far too often. Sobek stayed silent, gritting his teeth.

“Have you no explanation to offer?” Frowning, Isis raised her eyebrows. “I am willing to listen. I owe you that for all your centuries of faithful service. Surely something very…important must have prevented you from carrying out your critical assignment here on my river?”

Bek feared this new tone in Isis’s voice. It sounded almost like a challenge to confess.Clearly she suspects something. I am grateful she cannot watch my every movement up and down the Nile. I don’t dare tell her about Merys. Isis has no tolerance for improper involvement with humans.

Sobek shook his head. “I have no excuse, my Queen.”

“You must be punished, then, as a reminder not to stray from duty.” Isis raised her hands to the sky. Rumbling like thunder, her voice echoed off the water and the river banks. “I call for the cold from the outer darkness. Blanket my erring warrior with your crystalline embrace.”

So clearly my hero and heroine have their challenges in working their way to a happy ending and persuading Isis, for one, that they belong together!

Veronica Scott grew up in a house with a library full of books as its heart, and when she ran out of things to read, she started writing her own stories. Married young to her high school sweetheart then widowed, Veronica has two grown daughters, one young grandson and cats.

Veronica's life has taken many twists and turns, but she always makes time to keep reading and writing. Everything is good source material for the next novel or the one after that anyway, right? She's been through earthquakes, tornadoes and near death experiences, although nothing is as stressful as meeting a book deadline. Always more stories to tell, new adventures to experience--Veronica's personal motto is, "Never boring."