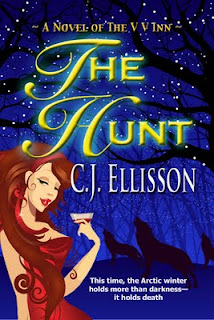 My Husband Makes Me Laugh
by C.J. Ellisson

On this momentous of days devoted to love, I’m reminded of one of the reasons I love my husband: he makes me laugh. Sometimes it’s on purpose, other times it’s not, but the result is the same—I’m laughing at him or with him.

One evening we were heading back from dinner and I was feeling a little buzzed and flirty. I imagined the young man, whose pizza delivery car pulled alongside ours at a stoplight, was smiling my way. He was be-bopping to his loud music, pulsing his head to the rhythm I could feel through pavement our cars shared. For a moment I was flattered, thinking he must assume I’m closer to his age and a flood of feeling good coursed through me.

I smiled at my husband and said something like, “I think the guy in the car next to us is flirting.”

Pete glances over and says dismissively, “I wonder if he knows he looks like he’s bobbing on a cock when he does that stupid little move with his head.”

I looked over at the guy and burst out laughing, damned if he didn’t look just like Pete said. “Oh. My. God. He does!”

Pete shrugs, “Maybe if he knew it he’d stop. Jackass.”

Another evening we were hanging at a local pub. Having just consumed appetizers, we were discussing the merits of ordering a meal. Pete scans the menu, looking for something appealing. “I had the two sausages… man, I’m still hungry.”

A subtle flirting enters my tone when I respond, “Those sausages seemed small.” I wiggle my eyebrows. “You know I like thick sausages.”

He looks at me with a twinkle in his eye; always willing to give as good as he gets, and says, “Yeah, they weren’t that big. After all, they were Irish sausages.”

The evening of the Pinewood Derby races in boy scouts, we went out to a friend’s birthday party at a local bar. Pete pulls into the unlit parking lot of a nearby failed restaurant.

“This doesn’t seem safe,” I complain while exiting the car. “We should really park near a light.”

My husband, who made our daughter’s sibling car, which got the fastest time on the track that afternoon and beat the pack champ’s car, puffs up his chest and loudly boasts, “You’re with the pit champion, baby! Nothing will hurt you.”

I burst out laughing at his arrogant tone, “Dear God, you’re bragging about the Pinewood Derby race?”

Occasionally, in our day-to-day lives, I’ll hear a word or phrase and jot it down so I can use it later in a piece. One time, while discussing where my husband grew up and where I lived for twenty years, he voiced his bald opinion on the negativity one often encounters in the region: “Wine, bitch, and blame somebody…. Go, Jersey!”

I scrambled for a pen, “That’s good, I should write that down.”

“Nah, don’t…. You know, you should write that down. That is good.” As my laughter bubbled forward he continued with, “Man, I’m good at this shit.”

One romantic evening I gussied myself up in a sexy nightie and sauntered out of the bathroom, fully made up and feeling sexy. Appreciation lit my husband’s eyes and as I climbed onto the bed he said, “You look very volumptuous.”

I froze, mid-sexy crawl, as his word registered. I kneeled on the bed, fisted hands on my ample hips. “Did you just call me lumpy?”

At his deer-in-headlights look, frozen with a horrific look on his face as he realized his faux pas and now worried it would spoil his chances at sex, I burst out laughing. “Er, uhh… I meant voluptuous. I swear.”

Do you have any funny moments with your spouse you’d like to share? Love makes the world go round, laughter opens your heart, and passion keeps you strong no matter what the world throws your way!

Blurb for The Hunt:
Vivian thinks she can control every aspect of a deadly game with her usual manipulations... but what if she can't?
Seven vampires and seven werewolves pay to hunt a supernatural criminal across the cold, vast grounds of an Alaskan resort. The one to catch her, and live through the encounter, will increase their power by feasting on hers.

The tiny vampire they track is more than she appears, however. To escape a fate of twelve years in silver chains, she'll do anything to survive the weeklong excursion. This time, the darkness holds more than just the stinging bite of the Arctic--it holds death.

Journey along, in this next installment of The V V Inn series, for a wild ride as the tale is told through the eyes of all the new seethe members.

To learn more about C.J.'s books (where you can read half of the novels for free), please visit her website at www.cjellisson.com.
Posted by Sarah Mäkelä at 12:00 AM