Hi Sarah. Thanks so much for letting me stop by today as part of the Perpetual Light Blog Tour.

As anyone who’s ever released their first book knows it’s a little bit stressful. There are so many things to worry about. Let me list a few because they’re amazingly fresh in mind!

Am I doing enough promo? Are the dates of everything lining up? What if something happens and the book doesn’t really release? What if the book releases and that’s when I find out it’s terrible? What if my mom hates it? What if someone asks me to do a reading? In public? What if no one, not even my mom buys the book? Why would she buy the book? I’m giving her a copy! Oh, God, no one is going to buy this book!

What in God’s name was I thinking? Publish a book? Have I lost my damn mind?

Yes, that’s what February 20, 2012 was like for me. It was the start of this blog tour and I was ever so slightly nervous. And who heard about it? My sister- via text message. The poor woman only wanted to know how I was. Have you ever received a novel-length text message? Well, that wasn’t the first she’d received, and I’ll bet it won’t be her last!

My husband called at lunchtime as he does everyday, and I unloaded on him because now I was several hours into a worrying fit and had not managed to do any new writing. It was a short conversation during which he told me not to worry, everything would work out fine and then asked what was for dinner.

My sister-in-law called around 4 PM, and by now I’d convinced myself I should jump from the second floor window. She was very clear on that idea being the worst I’d had. Then said all the things a good sister and friend says about how the book would be a huge success and I’d come so far and I shouldn’t try to write my other book today. I should focus on my blog posts and enjoy the moment.

It helped. I didn’t jump. But I didn’t relax. It took about 24 hours for me to finally come down out of the stratosphere and rejoin the world. In that period of time I tried a number of things to relax. I hit the treadmill, twice. Didn’t help, though I do love to blast my music when I workout. I ate chocolate. Lots of chocolate. Chocolate covered pretzels. Chocolate covered cherries. Chocolate covered coffee beans. Red velvet tea. Oven roasted dark chocolate almonds. (Thank God for that treadmill!) I tried to read another Mary Janice Davidson Undead story. Got four pages in and began wondering if I’d be as successful as Mary Janice and then stopped reading.

To say I’d worked myself up is an understatement, though that kind of energy does get things done- laundry, bathrooms, ovens, dinner. Of course, that was all done by 9:30 in the morning along with one trip on the treadmill.

I finally managed to relax the following evening. I’m not sure if it was just time to let go and relax or if my little friend just knew what he needed to do. But around 8:30 Dino, our very lovable black Labrador followed me everywhere I went until I finally got the hint. He wanted to cuddle. He’s so cute. He grabbed one of his many stuffed babies and came running over. He’s about 70 pounds but he likes to lay in my lap and hold his baby. And that just did it. Put everything back on track. I love that dog!

My grandfather always said, “Worry about nothing, Dolly. It all works out.” And he was right. My posts are all off and done. My book is released on time. And I’ve sold some copies. I will get reviews- good and bad. And that’s just life. Everything always works out.

What do you do when worrying seems to be getting the best of you? Feel free to share some strategies. I can always use new ideas!

I’d like to offer a $5 gift certificate to Barnes and Noble to one random commenter. All you have to do is comment on the post to be entered to win. To increase your chances of winning connect with me via one or more of the social networks listed below.

Twitter: https://twitter.com/#!/JordanKRose
Like me on Facebook: https://www.facebook.com/pages/Jordan-K-Rose/307285709309992
Friend me on Goodreads: http://www.goodreads.com/author/show/5751865.Jordan_K_Rose
Follow my blog via the networked blog button on my site. http://www.jordankrose.com/blog/
Everyone who comments is entered into the grand prize drawing for an eReader- Kindle Touch or Nook Simple Touch. 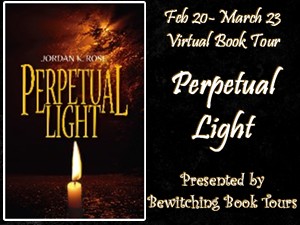 Fate is cruel. Especially when the one you’ve sworn to love for all eternity, the very soul who changed your destiny is the last person you should trust.


After more than three hundred years of running, Lucia Dicomano must make a choice.


Forced to take her place as a Pharo of Redemption, the divine slayer needs to master her forgotten powers. Lucia turns to Vittorio, the one vampire she’s failed to deliver from eternal damnation. But overcoming smoldering remnants of love, lust and anger aren’t their only obstacles.


Samuel, who may know Lucia better than she knows herself, hunts her with a fervor stoked by a thousand years of vengeful hatred. His plan—capture and enslave the weakened Pharo then take control of her elusive power.


Can Lucia trust Vittorio long enough to reclaim her powers? Or will she have no choice but to kill him and battle Samuel alone?

After trying her hand at many, many things- from crafting and art classes to cooking and sewing classes to running her own handbag business, Jordan finally figured out how to channel her creativity. With an active imagination and a little encouragement from her husband she sat down and began to write, each night clicking away at the keys with her black Labrador, Dino curled up under the desk.

A few short years later she’s entered the publishing arena with no plans to ever turn back.

Jordan’s a member of Rhode Island Romance Writers, as well as RWA National, and the New England (NEC), Connecticut, and Fantasy, Futuristic and Paranormal (FFnP) Chapters.

Her first book, Perpetual Light, releases in February of 2012 from Crescent Moon Press.
Posted by Sarah Mäkelä at 12:00 AM