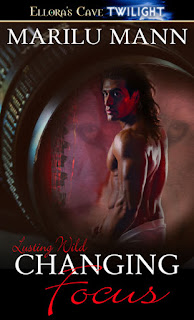 Reluctant to be a Pack Alpha, Micah Keeps Vigil has no hesitation about what he wants in a mate. A strong, intelligent, passionate and, most importantly, shifter female. He’s found her in photojournalist Olivia. She’s come to Micah’s lodge to write about winter sports.

One problem—Olivia isn’t aware she’s a shifter. She believes her vivid dreams are just that—dreams—and that her blackouts can be controlled with medication. There’s no way she’s been running through the woods on four feet! Micah has to convince Olivia to accept herself—paws and all—or lose her forever.

“What size are you?”

“Excuse me?” She bristled immediately. He moved closer, touching her shoulder.

“You’ll need warmer clothes, specifically long underwear. I keep a stock here for all my guests, there’s a closet full on the second floor. You’ll need to find your size and dress in layers. It’s the key to keeping your body temperature regulated in extremely cold weather.”

“Oh.” Smiling sheepishly, she met his eyes again. “A medium¬—unless they run big. Then I take a small.”

“I’ll let you decide.” He slid his hand down her arm, squeezed her hand then released her to lead the way out of the kitchen and up the main staircase. Olivia couldn’t help but watch him move. He was the most graceful man she’d ever seen in her life. And the way his jeans hugged his butt had to be nearly criminal.

“Here’s the closet.” He opened a door and stepped aside. She moved forward into the walk–in closet and laughed. It looked as though it held every possible color and size of long underwear. Each shelf was neatly labeled with the sizes it contained.

She glanced to the other side and laughed again. Those shelves held bathrobes and bathing suits. Men’s, women’s and even a few children’s sizes graced the shelves here. Vibrant colors and enough variety of styles to satisfy even the most hard–to–please customer.

“Bathing suits?” She tipped her head back at him.

Micah nodded. “Some people don’t realize we have a sauna and whirlpool. When they come for the winter, they’re pleasantly surprised, but usually unprepared. Of course, I have no objection to nudity in the sauna. It just depends on who else is here at the time and what their feelings are. I’m sure you’d look good in nothing.”

Olivia’s breath jumped out on a gasp. Had he really said that? He reached around her and pulled a couple of neatly packaged sets of long underwear off the shelf. “Try these. Just leave the ones that don’t fit in your room and I’ll take care of them later.”

Leading the way back out of the closet and down the hall toward her room, he spoke over his shoulder to her. “I’m going to go upstairs and finish dressing. I’ll meet you in the main room in thirty minutes.”

“My pleasure. Remember, layers. The long underwear, cotton, wool or flannel shirt and pants if you have them, at least two pair of socks, wool is best. I have hats, gloves and scarves downstairs in another closet.”

“You really are prepared, aren’t you?”

“I try to be.” He nodded at her again then turned and moved quickly up the stairs leading to the third floor. Olivia entered her room, the packages of long underwear clasped to her chest.

“What an interesting man. But really, Olivia Marie, you must get control of your hormones. Attacking your host is not a good idea.”

She stepped over to sit on the edge of her bed. Laying the packages down, she thought back to Micah’s sauna comment. Surely she’d misheard him since he hadn’t done or said anything even remotely suggestive after that. Her hand slid down her side and she shivered. What would his hands feel like against her skin?

They’d be rough more than likely. Would he run his hands over her breasts lingering on the undersides? Or would he concentrate his touch on her nipples? Would he squeeze hard or barely cup her breasts?

Her nipples pebbled at the thought as she cupped herself letting her fingers pinch the hardening tips slightly. Heat pooled in her belly as she slid her shirt off. Olivia traced a hand down her stomach to slide into her jeans. She plucked at the lace of her panties imagining Micah’s hands there instead of her own.

With a slight moan, she undid the buttons on her jeans to shimmy out of them. Lying back on the comforter, Olivia snaked two fingers to her clit. The warm flesh throbbed in answer to the soft pressure. With her other hand plucking at her nipples, she began to circle her fingers on that swollen damp spot between her legs.

Images of Micah nipping her breast raised her hips off the bed as she stroked harder and faster then slid her fingers inside her warm body. She let her fingers become his cock as she stretched to thrust into herself. Moving her fingers faster in and out of her pussy, she imagined his dark hair falling forward, stroking lightly across her shoulders as his gorgeous brown eyes held her gaze. Sliding up to stroke across her clit again, pinching it lightly before moving her fingers back down.

In her mind it was Micah sliding two fingers inside her. The heat and slickness as she gripped her own fingers made her breathe harder. She wondered what his cock would feel like. Rotating her hand so she could fit a third finger in, Olivia lifted her hips, thinking only of Micah fucking her.

His cock replaced his fingers in her imagination pounding into her pussy. Olivia groaned softly. She wanted to wrap her fingers in that long black hair to pull him down for a kiss. It would be a long, hot wet kiss where their tongues tangled together. Her other hand plucked at her nipples—one and then the other—sending frissons of pleasure that met the ones from her pussy in a molten pool in her belly.

Her heels thrummed the floor once, her hips pistoning against her fingers then Olivia muffled her cries of pleasure by turning her head into the pillows. Gasping, she let her body shudder back down to earth. A soft stroke across her clit as she withdrew her fingers from her own body caused another shiver to trace across her skin.

A moment passed then she remembered what she was supposed to be doing. With a soft curse, she jerked herself upright to rip open the long johns and get dressed. Someday, Olivia Marie, you will feel a man there again. Once you learn to control the savage inside. She changed her underwear but didn’t take time to wash anything other than her hands.

She headed back downstairs, feeling a little bit satisfied but a lot more aware. As she made the turn into the great room, she smiled. Micah leaned over the fireplace poking at the fire. His jeans accentuated a very well–made ass. Olivia could only dream of what it might be like to be bent over in front of him.

Marilu Mann brings the steaminess of the Louisiana bayous to her books and she doesn't stop there. Marilu's willing to travel to the frozen tundra of Wisconsin to heat up those northern nights and melt a little snow.
She'll also circle the world to Wales, Ireland, Scotland and back just to bring you books that make you sweat.

Currently residing in Texas, Marilu is an avid armchair traveler. Her sexy shifters will set your blood to boiling in no time. Owned by one Diva Teen and various animals, Marilu keeps busy writing the novels her readers beg for.

Marilu is thrilled to be a part of the Ellora's Cave family and loves to hear from readers.