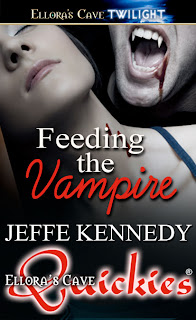 Through good luck and healthy cowardice, Misty has survived the earthquakes that have torn the world apart, but has no skills to speak of. Or so she thinks. She does have blood, and someone must feed the vampire who has offered his protection and strength in exchange for sustenance. Feeding Ivan is a priority, and Misty finally serves a purpose. But when she awakens tied to his bed, an unwilling gift to Ivan from the townspeople, she discovers he has hungers other than blood. Hungers he expects her to satisfy in the most carnal manner. Under his seductive persuasion Misty discovers she has the power to sustain Ivan in all ways, while experiencing unspeakable pleasure herself.

I was compelled to feed him. I had no choice, really.

Earl cleared his throat. “Thank you.” Our town administrator looked around for agreement, but they weren’t meeting his eyes either. Like kids ducking the teacher’s gaze. “Thank you, Misty. We all appreciate your…” He trailed off uncomfortably.

Sacrifice? Surely no one wanted to hear that word aloud. Martyr to the cause? No, not much better.

Earl shuffled the papers in his lap. Waiting for me to get to it, I supposed. Well, he had just said that feeding Ivan ought to be the first order of business. We couldn’t very well make plans for our community while the guy in charge of our defenses wilted before our eyes, especially since we needed him alert and focused. Me? I was pretty damn expendable. I hadn’t brought much to the table so far, except my survival, which really was accidental. Right place at the right time. Turns out stolid New England was just the right place to be for the particular form this apocalypse took. Granite bedrock and all that.

My boring hometown was a safe haven and everyone wanted in on our resources. The people turning up every day were let in or turned away depending on what they offered. I counted my lucky stars I’d been grandfathered in simply because my neighbors didn’t have the heart to kick me out. Excellent keyboarding skills and a customer-friendly personality didn’t count for much in this economy. Especially without, um, customers or working keyboards.

I couldn’t afford to be a useless mouth to feed. Their hearts would harden—they already had. Tonight was pivotal. We’d acquired a vampire of our own for defense. Everyone felt better about our future—if we could keep him happy. At least I knew how to make blood. You could say I was a natural. And yet, the certainty that had propelled me to my feet seemed to be bleeding away, frightened off by Ivan’s fixed intensity and everyone else’s obvious relief. They waited, restless, for me to just get on with it. Uncomfortable silence.

Hi, I’m Misty and I’m a Fool. I haven’t done anything really unwise in twenty-seven days. Kind of a record for me really. Apparently I was due.

The vampire just stared at me.

I set my yellow pad on the chair and made myself walk across the circle to where he sat in the tacky folding metal chair. My sandals slapped lightly on the tiles, making tinny echoes. Ivan’s roving gaze sent tremors of anticipation up my thighs.

A few murmured conversations resumed. They probably didn’t like the creepy silence any more than I did. I appreciated their polite attempt not to gawk. I’d never seen a vampire feed—probably none of them had either. I stopped in front of Ivan. He leaned back, long legs sprawled out in careless indolence. He tilted his head at my hesitation and held out his hands as if to help me down from a carriage.

“Perhaps we should step out of the room?” I tried.

“I haven’t the strength to stand.” His grave eyes watched me with avid intent.

If I ran, he would definitely find the strength to hunt me down. After all, he’d walked into this room. Heck, he’d arrived at the bridge leading to our sleepy town only last night, offering his protection in return for our shelter and sustenance. He had to have gotten there somehow.

He wrapped his long fingers around my wrists, cuffing them with bands of steel. Exerting steady pressure, he drew me closer, parting his lips. White fangs gleamed with fluorescent highlights. My heart thumped in panic, hot fear filling me.

“Will it hurt?” My voice sounded thready, weak.

Hunger flared in his eyes at the question. “It always does.”

Ivan snapped me against his hard body. The sharp movement splintered any second thoughts. He pulled me astraddle his lap. My cheap cotton dress hiked up alarmingly. The chafe of his dark denim jeans sent tremors up my fully exposed thighs. Shame and terror flashed through me.

Then all thought and emotion burst in flame, immolating me through the fierce violence of his teeth sinking into my throat. The agony of the deep puncture, fear feeding pain, fired through my blood. I struggled like a wild thing, without thought. Animal instinct screamed at me to flee, to escape by any means possible.

The vampire held me trapped. There was no escape for me, the mouse flailing under the cat’s paw.

My will, never my strong point, snapped. The fight ebbed away with the tide of my blood. The steady drop of pressure left me enervated, without resistance. Darkness filled my brain, prickled with sparking stars. I wilted, becoming a bit of detritus washed upon the shore of Ivan’s body.

Pain filled my veins, pumped through my heart. It replaced my blood, spiraling through my body from the insistent penetration of Ivan’s teeth in my throat. Helpless against the crashing waves, I relinquished my last hold on consciousness and sank into the hot, tarry sea of oblivion. 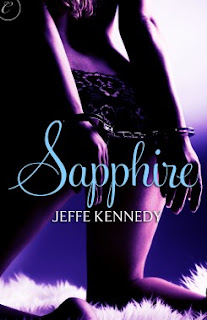 A successful executive, M. Taylor Hamilton is on track with her ten-year plan. Too bad her personal life consists of hitting the gym and grocery shopping. Enter the seductive Adam Kirliss. They may have a working relationship, but everything changes at an office party when he handcuffs her to the rail of a yacht. Taylor writes the adventure off as too much champagne, but when Adam challenges her to a date, she agrees to meet up with him. And follow his rules. They share a night of exquisite intimacy, brimming with both pain and pleasure. But afterwards, fearful of losing her heart, Taylor pulls back emotionally. Adam is determined to prove that she longs for the loss of control he can give her – and the passionate release it provides. How can he make her see that he wants her, and not just her body?

Kirliss captured her other wrist and held them close in front of her, his warm fingers massaging her skin, while he studied her face. The boat surged over a wave, disturbing her balance. Kirliss’s unusual eyes caught the light, boring into her.

“This is silly,” she tried.

“Do you want me to make you stay?”

“What?” Taylor choked. She couldn’t let him treat her this way. “No! You’ll do no such—”
She lost her breath entirely when he pressed up against her. Thinking he was trying to embrace her, she pulled away and found herself backed against the brass railing.

By the time she gathered her flustered thoughts, her wrists were handcuffed to the rail behind her. Mortified, a bit afraid and—worse—suddenly and wildly aroused…

Jeffe (pronounced Jeff- ee) took the crooked road to writing, stopping off at neurobiology, religious studies and environmental consulting before her creative writing began appearing in places like Redbook, Puerto del Sol, Wyoming Wildlife, Under the Sun and Aeon. She has been a Ucross Foundation Fellow (2001), was a Wyoming Arts Council roster artist, when she lived in Wyoming, and received the state’s 2005 Frank Nelson Doubleday Memorial Award for a woman writer of exceptional talent in any creative writing genre and the 2007 Fellowship for Poetry. Jeffe has contributed to several anthologies, Drive: Women’s True Stories of the Open Road. (2002), Hard Ground (2003), Bombshells (2007) and Going Green (2009). Her first book, Wyoming Trucks, True Love and the Weather Channel was published by University of New Mexico Press in 2004. An erotic novella, Petals and Thorns, came out under her pen name of Jennifer Paris in 2010, heralding yet another branch of her path, into erotica and romantic fantasy fiction. Jeffe lives in Santa Fe, with two Maine coon cats, a border collie, plentiful free-range lizards and frequently serves as a guinea pig for an acupuncturist-in-training.