Mind Over Matter
By S.J. Clarke 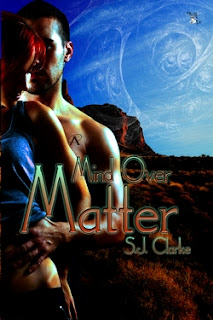 Rebecca McKenney grieved the loss of her daughter for three years. Now, a vision showing Sabrina three years older, suggests her baby is still alive, and the FBI agent who gave up the search is the only one who can help find her.

Special Agent Dan Cooper is haunted by a tragic mistake made early in the investigation of Sabrina's disappearance. Now to ease his conscience he agrees to help Rebecca search.

Together they fight inner demons, all to real bad guys, and an attraction neither wants to admit to. Each step closer to finding Sabrina is a step deeper into deception and evil.

Can Rebecca and Dan save Sabrina before it's too late?

Rebecca knew from experience she didn't have much time left. A vision came at her, hard and strong...

The child’s face from the milk carton, about six or seven years old, hovered before her, similar yet different. Shivers wracked her body as she huddled in a corner, her long brown curls limp and dull. Smudges on her face spread when she used a dirty forearm to swipe away tears, and a cut bled through the tear in her dress. A flickering light illuminated the dark room, hinting at secrets in the shadows. The sound of water dripping, slow and steady like a leaky faucet, met Rebecca’s ears and her nose crinkled at the stench of urine and human waste. The child looked up. All trace of color drained from her face when a deep voice crept out of the darkness.

“Rebecca, did you hear me?” Ruby’s voice penetrated the fog surrounding Rebecca’s mind.

“W-What?” She lifted her head, taking in the dining room around her. The tourist family still sat waiting for their breakfast. “I’m sorry Ruby, what did you say?”

“You okay, hon? You were in another world there for a minute.”

“I’m fine. Really,” she added at Ruby’s doubtful expression. “Didn’t sleep well again last night, I guess.” She forced a grin. “Good thing you caught me before I nodded off and started drooling in my coffee.” The mention of coffee drew Rebecca’s gaze to the carton of milk again. The girl’s innocent face stared back. Something seemed wrong. Rebecca leaned in, reading the caption under the photo. Nicole Wilson; missing for six years, before Bree even.

“I hope you don’t mind that I helped myself to the milk,” Rebecca said, and explained what happened. “Didn’t want to be a bother.”

“Honey, it’s no problem at all, but you didn't have to do that.”

“Not to worry, it’s over and done now.” Rebecca looked down at the pancakes and fruit before her and knew little would make it past her lips “Breakfast looks delicious, as usual,” she lied.

Ruby looked over at the children’s order of pancakes in front of the empty seat across from Rebecca. She moved her gaze back to Rebecca for a moment longer, before nodding as if confirming something in her head. “Okay then. Enjoy.” Ruby picked up the milk carton as a bell dinged from the kitchen area. “Let me know if you need a refill on your coffee.” Smiling, Ruby went off to deliver the next order.

Rebecca’s stomach roiled at the thought of eating. Nausea and a headache overwhelmed her. She needed to get home where she could decipher what this vision meant. With Ruby monitoring her every move, coming up with a way out of the diner proved difficult.

Forcing another smile, Rebecca picked up her fork and knife and waved them in the air for Ruby to see. At Ruby’s disappointed frown, Rebecca cut the pancakes, and placed a small piece between her lips. Once Ruby smiled and turned away, Rebecca spit the bite out into a napkin. She spent another few minutes cutting and moving food around, hiding small bits under the second pancake. Pulling some money out of her wallet, she kept an eye out. As soon as Ruby went back to the kitchen for the next order pick-up, Rebecca threw the bills down on the table and made her escape.

Rebecca’s first deep breath came when she sat safe inside her car at the other end of Main Street. Home. She had to hold it together until then. Shoving the key into the ignition, she crossed her fingers, and then groaned at the dull grind that met her ears.

“Crap. Not today!” Rebecca cursed for putting off taking the car in to Joshua. Hands shaking, she tried again, holding her grimace until the engine caught.

The edge of another vision crept in while she pulled into the driveway. “Shit. One more minute, come on, one more minute.”

She fumbled at the keyhole, hands shaking too hard to fit the key in the lock. Rebecca crossed the threshold and fell to her knees as the pain sliced in again, worse this time. Never before had two visions come so close together. What the hell?

Rebecca’s world faded and in its place…

Sabrina appeared. Her baby. Sitting on the floor in a room of shadows, chin resting on drawn up knees. “Where are you Mommy? Why haven’t you come?” The shadows opened up, pushing forward to swallow both the light and Bree.

“Nooooooooo.” Rebecca came back tears streaming down her face and fell to the floor. Limp, she laid there, an arm thrown across her eyes. “So close.”

Rebecca rolled as her stomach revolted, giving up its meager contents. Pushing herself to her knees with the last heave, she drew the back of a hand across her mouth.

The memory of losing Sabrina burned in her mind forever, but these fresh images; God, they made it so much worse. Rebecca crawled the few feet to the still open door, shoved it closed and leaned against it, shaking with sobs.

The late morning sun shone through the windows when she refocused. Struggling to her feet, she took in the scene around her.

Clean this mess up, and then shower. You can deal with the rest later. Rebecca tossed the soiled clothes in the washing machine on the way to the bathroom.

Revived by the hot shower, Rebecca poured a glass of iced tea. She curled up in the big chair in the living room, rested her chin on her knees, and tried to make sense of the morning’s events. Break it down. Concentrate on one thing at a time. Tackle the vision at Ruby’s first.

Who are you, Nicole Wilson, and why are you in my head?

S. J. Clarke has published over fifty articles as a columnist and regular contributor for a variety of lifestyle and human interest websites. She is a grateful member of the Writers' Community of Durham Region, and proud to sit on the Board of Directors for The Ontario Writer's Conference.

Sandra also co-authored Touretties, a touching tribute featuring testimonials from patients and and their loved ones living with Tourettes.

Mind Over Matter, released in November, 2011 through MuseItUp Publishing, is her first novel.

Join me on LinkedIn: http://www.linkedin.com/home?trk=hb_tab_home_top

Mind Over Matter Facebook Page:
http://www.facebook.com/MindOverMatterbySJClarke
Posted by Sarah Mäkelä at 12:00 AM