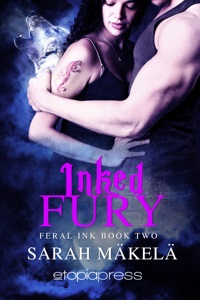 If Connor can’t claim his mate soon, she could be taken from him forever…

Time is running out for Connor O’Reilly to claim Angelique as his mate before the Pack. His crazy ex-girlfriend is petitioning a comeback, and if Connor isn’t careful, his Alpha may ship him off to Alaska to mate with said crazy ex-girlfriend. After the recent attack on Angelique, he’s afraid to push her too hard for a commitment, but if she doesn’t make one soon, he’ll lose the one person that means everything to him.

Angelique Trinette is still reeling from the recent attack that left her a claw’s breadth from being skinned alive. The good news is that she’s fine. The bad news is that her attacker, a powerful druid named Mahon, is still at large. And Mahon isn’t the type to let things go.

So when a mysterious woman offers to help Angelique learn more about her abilities and her people’s history, Angelique struggles to remain truthful to Connor and still take the woman’s advice. If she can strengthen the power she receives from her black panther familiar, she’ll be able to defend herself against Mahon. But all strength comes with a price. And not all prices are worth paying.

Angelique Trinette stretched her arm over to Connor’s side of the bed, but he was gone. She sat, rubbing her hands over her arms, chilled by the blowing air conditioner. From the clear indention on his pillow, he couldn’t have been up for long.

A low rumble drifted up from the side of the bed. Kira stared at her with shiny golden eyes. Behind her black panther familiar, the bathroom door stood wide open with bits of snowy white toilet paper littering the floor.

“Kira! What did I tell you? You can’t do this again. No trashing my place.” Angelique dropped back on the bed, instantly regretting that move as pain burned in her side. Frustration rose to the surface like an internal thermometer stretching toward its breaking point. But the tap of dress shoes drew her attention to the bedroom’s doorway.

Connor O’Reilly, her sexy werewolf boyfriend, adjusted the cuffs on his pristine white dress shirt. With a cocked eyebrow, he smiled. “What’s wrong?” He slid his gaze to the open bathroom door, and the smile faded around the edges. “If I had more time, I’d help you clean up, but I have to be at work early and—”

“I know. It takes a while to get to the office from here.” Angelique had moved further away after breaking up with him almost a year ago. For his protection…and hers. She was different from the average girl, but then again, he wasn’t a human guy either. They each had powers one shouldn’t mention in public.

Connor crossed the room to stand beside the bed. He brushed her hair out of her face then placed a kiss against her lips. The barest of caresses. What a way to start the morning. He slid his tongue over her bottom lip, and she opened her mouth to him, needing more.

She ran her palm over his crotch. His cock hardened beneath his suit pants. She unbuckled his belt, then went for the zipper, but he held her wrist just hard enough to keep her from what she wanted. If only she’d woken up earlier.

He pulled back, lightly panting from the intimate exchange. “I want to. I really do, but this client—”

With a fingertip over his lips, she silenced him. “Don’t worry. We can continue this later when you come over this evening.” She shoved her legs off the bed, then pushed past him. Disappointment settled in her chest, but his work was important. Truth be told, she’d brought this on herself by moving so far away.

She walked to the bathroom, but he stopped her in the doorway with his large hands on her hips, pulling her into his arms.

“I’ll be here. You can count on that.” He hooked his index finger under her chin. He tilted her head up, forcing her to look at him. “Take it easy today. We can clean up the mess in the bathroom later. It’s not important.” He trailed his knuckles over her cheek. “Get some rest.”

Pain pinched her nerves as he brushed over a sore spot. Bruises from the incident with Mahon last week still marred her complexion. If only Connor had killed the druid when he had the chance, then she wouldn’t be living under the threat of him still out there.

She wrapped her arms around his muscular torso and rested her head against his chest, enjoying the musky scent of his cologne. Having him here relieved the fear of another imminent attack.

Tomorrow was her first day back at the office. Coming up with an explanation suitable for her coworkers had been challenging, but she’d managed with his help. The werewolf doctor had written an excuse note allowing her to rest up without worrying about her workplace for a few days.

Her heart raced at the thought of people staring at the marks on her skin. Things might get awkward at work, but she’d deal with it. While it was a first, she couldn’t let it affect her ability to support herself and Kira.

“Please do more than try.” He ran his hand over her back in soothing circles.

“I promise.” She looked into his green eyes and brushed her fingers over the silky button-down dress shirt covering his hard, muscular chest. While she cared more about a person’s personality than their physique, she couldn’t deny that his solid build calmed her. He’d proven his muscles weren’t all for show.

If he hadn’t arrived when he did that night, she would’ve died and Kira would’ve become Mahon’s slave. Pain tightened her chest at the memory, but she needed to move on. It was over. But they both knew the druid might try again, but with Connor protecting her, she had hope.

The beep of his cell phone broke the intimate moment. He pulled away a little to check his phone with a sigh. “I have to go.” He stole a kiss from her lips, but this time he didn’t linger. “I’ll see you later, Angel. Call me if you need anything. You’re more important so I could reschedule the meeting if I had to, okay?” At her nod, he glanced behind her, and a smirk curved his lips. “Don’t give her too much grief, Kira.”

Her familiar let out a low rumbling growl. While Connor and Kira were slowly getting used to each other, she wouldn’t feel comfortable leaving them alone in the same room for any length of time. She leveled her gaze at Kira, who instantly calmed down. The black panther knew she wasn’t in the best of moods after the shenanigans in the bathroom.

“I love you, Angel.” He retreated from the bedroom, the soles of his dress shoes clacking across the hardwood floor.

The front door opened then closed behind him, and his keys rattled in the lock before it clicked securely.

She glanced back at the bed. The cozy warmth called to her. Should she take advantage of the moment while it lasted? Besides, she wasn’t typically awake this early even when she had work so catching a few more winks of sleep might be nice.

The slam of a car door drew her to the window, and she peeked through the blinds.

He had straightened his tie before he started the ignition, his sports car roaring to life. With their relationship being new again, she would’ve liked time to ease back into a comfortable life together, not the crazy mess they went through last week.

After finding out about him being a werewolf, she hadn’t expected life to be easy. In fact, she didn’t feel so alone and different now. He possessed supernatural abilities too. Although, she wore her beast on her skin, his lurked beneath the surface.

Her paranoia levels were heightened since the attacks, but she couldn’t let what happened throw her life so far off balance when she’d finally begun to find happiness. Normalcy was out of the picture.

Thankfully, she didn’t have to worry about one person. Monica. Connor’s Alpha had banished his ex-girlfriend to Alaska for assisting Mahon in trying to kill Angelique.

Shaking those thoughts away, she walked back toward the bed, deciding to get more sleep as Connor had suggested. She didn’t have to be awake right now. Not having him beside her must’ve woken her. The fact he had that much power when they were so newly back into their relationship scared her. What if something happened to him? Would she ever be the same again?

She didn’t want to rely on him being there forever because life seemed fleeting now. Before danger had kept her from doing anything irrational, but now a threat hid in the shadows, ready to pounce when she least expected it.

No, she wouldn’t have that kind of attitude. She’d never believed it before, and she wouldn’t now. She’d given him hell with having to find her. If things got out of control, she could broach the subject of moving. Maybe he would go with her. Their relationship wouldn’t have to suffer this time because of her fear and the desire she had to protect them from harm.

She slipped under the covers. Any warmth from their bodies had drained away. She sighed. Her side still ached, and stitches trailed up her torso from where the druid started to skin her. Memories of the event flashed in her mind, and she squeezed her eyes shut against them.

A warm furry muzzle nudged her hand, and she looked to find Kira watching her. The big cat cocked her head to the side.

“Fine,” Angelique said, holding out her hand, “come back to me.”

Kira leapt onto the bed as gracefully as expected for a feline. The bed sagged beneath her weight, and magic exuding from Kira sent tingles over Angelique’s skin. Kira placed a paw on her bare torso, and Angelique focused on her breathing. Pain burned where the big cat melted into her skin going from real life panther to dynamic tattoo.

One paw, two paws, three… Finally, the bond they shared was reconnected allowing her to feel Kira’s emotions, which had the hazy side effect of Angelique having an edge of her personality at times. That didn’t matter. She enjoyed Kira’s company, but being in a relationship with Connor and having intimate needs required her to shed her familiar more these days since neither of them felt comfortable with Kira purring while they had sex.

Kira brushed against Angelique’s back, leaving behind the silky feeling of fur caressing her skin as her familiar settled down for a nap in her favorite spot on Angelique’s lower back.

“Good idea. He might have to work, but we have one more day until we go back to the daily grind. We might as well enjoy it while we can.” She stretched her legs and stared at the ceiling.

Life had been easier before Connor came along. However, she preferred being with the one she loved over suffering alone.
Posted by Sarah Mäkelä at 8:00 AM