Hey everyone! The final book in the Amazon Chronicles is now available for purchase! I did a little something different with this one. It has some ménage in it. Yum... 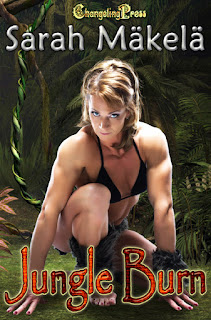 The new Amazon Princess chooses between a close friend who wants her and the object of her desire...

In the series finale, Sabina Rukan is ready to find her mate. She must choose between her close friend, Tiago, who lusts after her, and the object of her desire, Rafael. When the three of them come together, Rafael discovers the feelings between him and Sabina are mutual, and he'll stop at nothing to make her his mate.

"I'm doing well enough. I need to talk with you." She held on to his hand, pulling him out of his hut. With her being a weretiger, she had comparable strength to his, but she'd been taught not to use her full strength from a young age. That would only hurt people around her, which she was very careful about.

She walked with him through the village, her gaze set straight on where she was going. Her shoulders were tense, but Tiago used his free hand to squeeze one of them slightly. "Relax," he said.

"Your parents would kill me -- hell, my parents would probably help -- if I claimed you without their permission." The wicked quirk of his lips teased her. She wanted to punch him in the face, but that wouldn't help her cause.

"And?" She propped her hands on her hips.

"I might be able to help ease your desire." He helped her to the ground then settled her onto her back. His hands went to the strip of cloth covering her chest...

Buy now: http://changelingpress.com/product.php?&upt=book&ubid=1901
Posted by Sarah Mäkelä at 1:43 AM