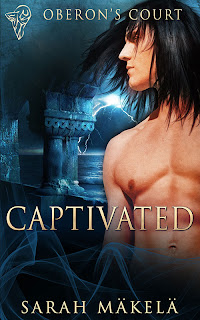 When a mercenary, whose purpose is to dispose of wicked Unseelie fae, meets a dark elf, she’ll question her mission and become captivated…

After her family was killed by a dark elf, mercenary Honora Butler’s purpose is the disposal of wicked faeries, elves, and other Unseelie beings, but she’ll find herself questioning her mission when she meets Brennan, a dark elf who doesn’t conform to what she believed his kind were like.

Brennan O’Niall doesn’t know what it is about Honora that makes him crave her, but he wants to find out. However, when she’s charged with the murder of a friend, he’ll have to discover the truth and decide just how much she means to him.

Gritting her teeth, Honora Butler sneaked farther into the dark, snowy forest. Danger lurked within the shadows, and she would kill or be killed. Death didn’t intimidate her anymore. She knew it too well.

Everyone she’d loved had been taken from her.

Snow crunched beneath the soles of her knee-high leather boots. When she was young, the Mercenary Guild had taken her in. They’d seen her abilities and her determination. They’d trained her, given her a chance when she’d wanted only to die, and now she did what she bloody well could to make sure the dark beings of the Unseelie Court hurt no one else.

A horrified scream erupted ahead, beckoning her deeper into the forest. It had to have been caused by her prey. Picking up her pace, she pulled a throwing knife from its sheath. Her magic surged into the blade, filling it with power and making the metal white—hot.

The trees broke into a clearing. The cause of the cries stood in the dirt road. A woman cowered on the ground while a short, stocky man dressed in blood red with a matching hat sneered at her. He looked to be having far too good a time.

"I have a husband and kids. Please, don’t hurt me," the woman whimpered. "My master…he’ll—"

The Fear Dearg snorted and crossed his arms in front of him. He stared down his crooked nose at the terrified woman as if pondering what to do first.

Honora doubted the woman was in immediate danger. The Red Man mostly engaged in cruel pranks on those he sought, but that wouldn’t stop her from killing him. Her mission in life was to rid the world of malevolence.

She slid from the trees, taking one quiet step after another. "Na dean maggadh fum," she said. Those words, ‘do not mock me’, were the best chance she had to take him down without a problem.

The Fear Dearg jerked his gaze to Honora. His lips curled back into a snarl at the interruption. "So be it. Now go on. Get out of here. Can’t you see I’m busy?" He stared at her blankly, waiting. "What? You want my favour and prosperity? Wait for your turn."

Just like that, he returned his focus to the woman. He grabbed at her dress.

With a snap of her wrist, Honora sent the throwing knife sailing through the air. A wash of blood arced in a thick spray as the Fear Dearg collapsed, the knife lodged in his head.

Shrieking, the woman scurried backwards from the corpse. Her eyes were wide and horrified at the sight of the dead faerie. "What have you done?" she asked, glancing Honora’s way. Shaking her head, she picked up her large basket with foodstuffs that lay on its side. Most of the food had fallen out, but the woman didn’t bother gathering it. She took the basket, then ran off down the dirt road.

What had that been about?

Honora watched the woman until she disappeared around the curve of the path. She walked over to the dead Red Man then tugged her blade out of his skull. It came away easily, blood dripping off it in great crimson drops. She wiped it clean on his jacket before tucking the knife back in its sheath.

Her stomach rumbled. On the ground was an unsoiled loaf of bread from the woman’s fallen food. She stripped off her bloody gloves and crouched. She brushed off a few leaves then tore a piece from it and lifted it to her lips.

In the distance, she heard a faint noise like that of a large flock of birds beating their wings. That couldn’t be right. Birds weren’t typically active at night there. Yet the sound grew louder.

The sudden realisation of what it was punched her in the gut. She dropped the bread and raced after the woman. Honora needed to find the safety of shelter. She couldn’t be out here when the Sluagh—restless spirits of the dead—flew over. What they did was worse than death. They captured their victims’ souls.

Behind her, the cries became impossibly louder. She didn’t have much time at all. She had yet to spot any homes or places to hide and knew if she were spotted she would be connected with the murder of the Fear Dearg, and hunted. She wouldn’t be safe unless she found somewhere soon.

Chancing a look over her shoulder, she saw a horrible black mass darken the sky. Screams of their victims filled her ears then. They were close. She caught sight of an elegant manor off to the left.