Hey everyone! I'm thrilled to announce that Jungle Blaze, the third book in my Amazon Chronicles series, is now available for purchase! 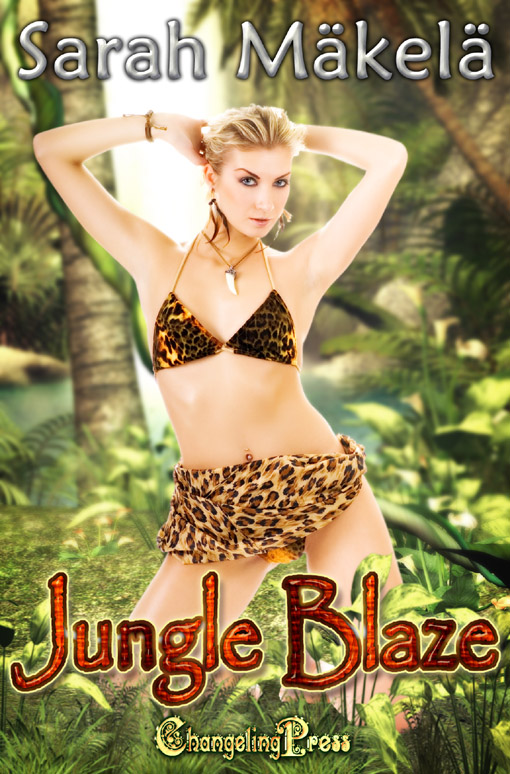 Sol has seen others around her find their mates, and she's determined to find her own, except the man who has caught her eye is standoffish and has no intention of getting into a relationship.

Eduardo, the second in command of the werepumas, has no interest in the mating going on around him, but his stern attitude is about to change when he finds what he didn't know he was looking for -- Sol.


Soft moans filtered into her sleep, and Sol Rios blinked open her eyes. Drowsily, she pushed herself into a sitting position and rubbed her hands over her face. Sleep wasn't her friend anymore. Not since her neighbor, Rubia, had mated with the werepumas' leader.

The quiet sighs of pleasure gained intensity and became more insistent, more demanding. Her hands balled into fists. Dampness and warmth gathered between Sol's legs. She squeezed her thighs together against the cruel sensation.

This was crazy. She had to get away from here. Would it look too suspicious if Sol asked Adara, the Amazon Queen, if she could move her hut? Rubia and Adara were friends. Sol didn't know if there would be a problem, but she would have to come up with a good reason, instead of just complaining about the... noise.

Once dressed, she stepped out into the night.

Darkness blanketed the village, and only a few torches here and there provided light for her to see. She headed toward the center of the village where the Amazons and werepumas held their feasts. Embers glowed hot in the fire pit. She sat beside it, enjoying the heat and the night sounds of the rainforest.

A few guards -- both Amazon and werepuma -- were prowling the catwalks, and one of the Amazons noticed her with a wave. She returned the kind gesture then lowered her gaze to the coals. Toasty warmth caressed her skin. She wrapped her arms around her legs, hugging them to her chest, and then rested her chin on her knees.

Movement drew her attention away from the fire pit, and she caught sight of a tall, lithe figure striding from the village's entrance toward her. Torchlight revealed his face, and she sucked in a breath. The werepumas' second in command. What was his name again...? Argh, she couldn't remember.

She was thankful for the darkness; otherwise, she'd have run.

Her gaze followed him as he walked past without even looking at her. She buried her face in her legs, wishing she had what the others had. More of her people were finding their mates, yet no one paid her any attention. Especially not the man she found most attractive. He didn't even spare her a glance.

At this rate, her womb would become barren before he even made eye contact. She shook her head, shrugging off any pity for herself. Peeking over her shoulder, she saw the pumas' second in command standing in front of Rubia's hut. Even from this distance, she saw tension in his posture. Maybe Rubia and the werepuma leader were still rutting like wild animals.

Sol turned away before he felt her gaze on him. Not like that would matter much. She hadn't seen him look or talk to any of the other women aside from Adara, Rubia, and a few Amazon guards. All occasions were strictly for business. He didn't seem to possess much charm or charisma, just a stern, no nonsense attitude, and yet Sol couldn't help the attraction she felt toward him. What was wrong with her?

Faint footsteps approached her from behind, but maybe he was just leaving the village again. It didn't mean he'd have any reason to talk with her. Right? The sudden encompassing silence unsettled her.

Out of the corner of her eye, she saw a pair of denim-clad legs. Her gaze slid up those strong legs and over his solid chest until she stared into his dark blue eyes.

Buy now: http://changelingpress.com/product.php?&upt=book&ubid=1901
Posted by Sarah Mäkelä at 1:04 AM